Once a cut-off percentage is announced by a college, all applicants who fulfil the condition have to be given admission even if the number of seats for the course are less, DU VC said.

New Delhi: The current cut-off based admission system puts students from the boards where the marking is "strict" at a disadvantage, Delhi University Vice-Chancellor Yogesh Singh said here and expressed the hope that this would change in a year. Singh said he has constituted a committee to look into the admission data and the recommendations of the panel will be deliberated upon in the coming Academic Council meeting on December 10.

Also read | Admissions to DU from Kerala board higher than UP, Haryana, Punjab state boards

"We have many options for admission - to continue with the existing system, the second could be normalisation of marks of various boards, third could be an entrance test and the fourth can be giving 50 percent weightage to entrance test and 50 percent to (board) marks. Let the academic council and executive council take a call," he told PTI in an interview Talking about his personal view on the continuation of the cut-off (merit-based) system, Singh said he is "not for it".

Explaining the reasons, he said the students from the boards which have a "lenient" marking system have an advantage over others in the current system, "while those from strict boards are suffering".

"It is a good thing we are popular in Kerala, but we need to resolve this (the other board students not getting admission to DU)," he said. Stressing that the time has come to relook at various processes that are in place, he said things will change in a year's time. Asked about the various admission criterion under consideration, he laid down the pros and cons of every possible system that could be implemented.

"If the student has cent percent marks, what will normalisation do? Even if we take out some average, it will be high. The entrance test is also not a fool-proof system. "People say it encourages coaching and causes unnecessary stress for students. Then Central Universities Common Entrance Test (CUCET, the union government has decided to conduct it) is also an option," he said.

Till the fifth cut-off this year, 74,667 students had secured admissions against 70,000 undergraduate seats with some colleges like Hindu College seeing over-admissions. Once a cut-off percentage is announced by a college, all applicants who fulfil the condition have to be given admission even if the number of seats for the course are less.

Last year, till the fifth cut-off, 67,781 students had secured admissions against 70,000 seats. Across the student groups, there has been a demand for the reopening of campus and the varsity authorities were considering it. However, the vice-chancellor said, their confidence has gone down after the emergence of Omicron, the new variant of coronavirus, and the university will wait for a month before taking any decision.

"The university is open but only. Ph.D. students are coming to campus. The practicals for final year students are happening. How can I reopen campus till the time Delhi Disaster Management Authority (DDMA) allows 100 percent seating capacity," he said. Singh said that a classroom has a capacity of 60 students but the admissions are close to 120.

"The DDMA mandates that the seating capacity has to be 50 percent of the classroom capacity, which means I can call 30 students. I will have to leave out 70-80 students. How is it possible? Then there is the issue of hostels where already there are space constraints," he said. "We have students from various states and coronavirus is still there in other states. We had planned to reopen but the latest situation has dampened our confidence. We will wait...," he said. 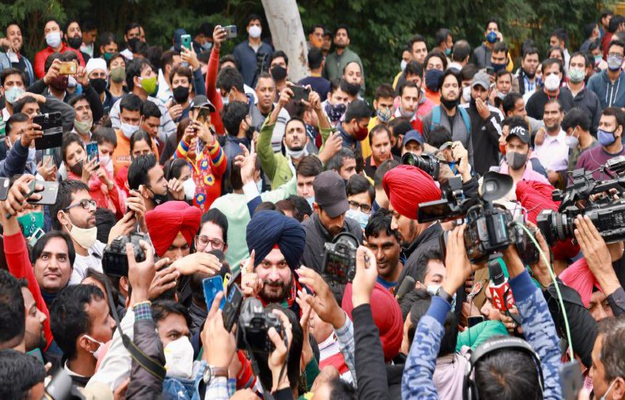