Indian Institute of Management (IIM) Nagpur has already started a second campus in Pune which will start functioning in September. 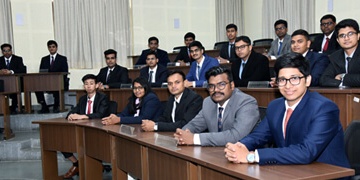 NEW DELHI: Indian Institute of Management (IIM) Nagpur has plans to set up an offshore campus in Singapore in the next two years, according to the Times of India report. The institute has already started a second campus in Pune which will start functioning in September. The institute will also set up another campus in Hyderabad.

It was the effort of one the IIM-N directors, Puneet Pushkarna, who is an alumnus of Laxminarayan Institute of Technology (LIT), settled in Singapore, who brought this entire plan to start a campus there, the report said.

The newly appointed director of IIM Nagpur Bhimaraya Metri told TOI,“We aim to be in the top ten IIMs in the next few years. Already we are among the top-performing institutions from our batch of IIMs. We’ve doubled our capacity to 240 from the last academic session (2020-21) from 120.”

According to the report, the institute has planned to shift to the new building in Mihan in phases by shifting the second year batch. It will have 13 classes of which six will be completely digital and they will include live lecturers from offshore faculty.

There will be an international conference organised by the B-school from December 27-30 where all the management will participate. “It would be conducted under the aegis of the ‘International Society for Data Sciences and Innovation (ISDSI). It would be the first of its kind conference in the city, where the students would get a rare chance to interact with global management gurus. We’re targeting around 1,000 registrations,” the report quoted Metri.

IIM Nagpur on May 19 in a press release said that it will collaborate with Jaro Education to launch 4 new techno-functional postgraduate programmes to enhance the skills of working professionals.

Your IIM Nagpur brochure has been successfully mailed to your registered email id “”.