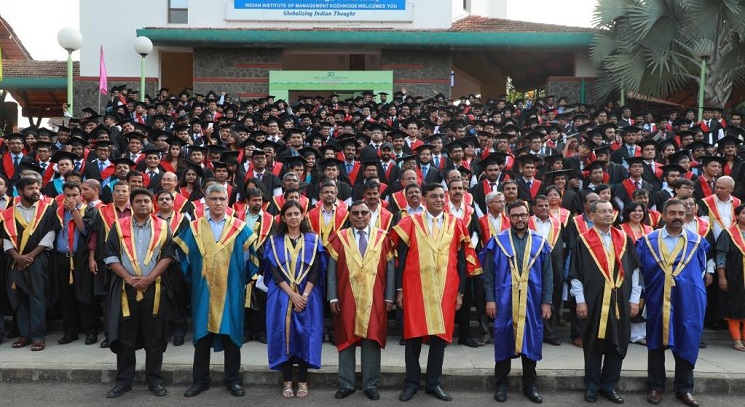 NEW DELHI, MARCH 9: The Indian Institute of Management Kozhikode (IIMK) awarded diplomas and fellowships to 572 students during its 20th Annual Convocation. As many as 378 students of the PGP class of 2018 graduated among them 103 were female students.

The chief guest of the occasion, Dr. Janmejaya Kumar Sinha, while congratulating the graduating students and their proud parents, summarized his address in seven quotes of wisdom and elaborated what those meant to him. These quotes emphasized the values of empathy, kindness, perseverance, courage, integrity, etc. Quoting Buddha, he said that the path to the goal is more important than the goal itself. Drawing inspiration from Confucius, he advised them not to be reluctant in pursuing an innovative course of action when existing ones are not sufficient. He further urged them to pursue their professions in a way which would be a message to others.

In his remarks to the graduates, Director-in-charge Prof. Kulbhushan Balooni talked about the importance of having clarity about purpose in life. He quoted the famous lines “For a life without meaning, is a kite without a string, at the mercy of the tempest.” The Director stated the glorious achievements of the institute and significant contributions made by the faculties, research scholars and students in the field of knowledge. He also spoke about the significant contributions made by newly set–up business incubator and entrepreneurship development center ‘IIMK LIVE’ in fostering entrepreneurship and creating new job opportunities.

In his maiden address as the Chairman of the institute, A. Vellayan solicited the cooperation of all stakeholders in pursuing his vision of making IIMK one among the top 3 IIMs within the next 3 to 5 years. In his welcome address, he talked about the importance of commitment to the society and contributing towards making the world a better place to live.