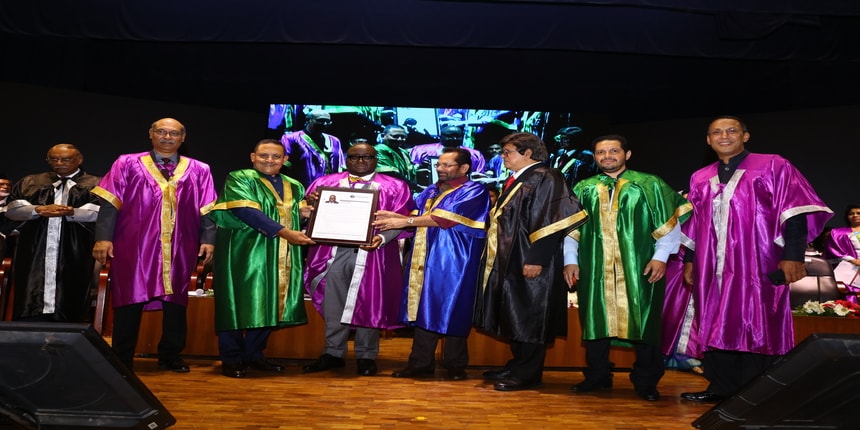 New Delhi, October 11: B. S. Abdur Rahman Crescent Institute of Science and Technology celebrated the ninth convocation day on October 5, 2019 (Saturday) in the campus. The degrees were handed over to the students by Hon’ble Union Minister of Minority Affairs, Shri Mukhtar Abbas Naqvi. A total of 1396 graduates including 21 Ph.D., 379 PG and 996 UG received their degree at the Convocation ceremony.

The Chief Guest Hon’ble Minister of Minority Affairs, Shri Mukhtar Abbas Naqvi, delivered the convocation address by congratulating the rank holders. He said, “In India, we have a vast human resource, more than 500 million strong, below the age of 25, which is the largest in the world.” “The achievements of the Indian youth have given India a proud place in the scientific and technological world. Science and Technology have always been an integral part of Indian culture. India has produced many great scientists in different disciplines,” He added.

India has a vast history of science and technology. In the short span of its post-independence history, India has produced thousands of successful scientists. These brilliant scientists have significantly contributed to the advancements in physics, atomic science, space, mathematics and others. I am sure that there may be one among you who is going to rewrite Indian history in terms of new inventions and discoveries. Let the great Indian scientists be your motivation, inspiration and a guiding force in your life ahead.”

Highlighting the achievements of the institution, Dr Sahol Hamid Bin Abu Bakar, Vice-Chancellor, B. S. Abdur Rahman Crescent Institute of Science and Technology said, “Crescent has always topped in facilitating better teaching-learning opportunities for our students. The programmes offered by our institute are aligned with the industry need, thus providing scope for our students to enable themselves to be job-ready by the end of their period of study. A total of 273 meritorious students have been identified for their outstanding academic performance in 2018-19 for which they shall be receiving cash prizes worth Rs.8.6 lakh. It is not just students but also faculty members who were recognized for their achievements. Around 70 faculty members were honoured with certificates & cash prize for their remarkable contribution to Teaching-Learning, Research and Extension activities in our institution.

The convocation was concluded after Pledge was taken by the graduates followed by the National Anthem.