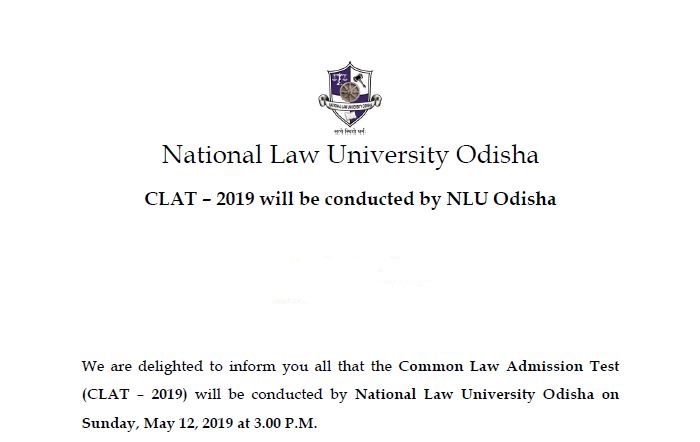 OCTOBER 11, NEW DELHI: The Common Law Admission Test commonly known as CLAT will be held on May 12, 2019 by the National Law University, Odisha. In an official notification announcing CLAT 2019, the Convenor, Prof Srikrishna Deva Rao, mentioned that the national-level law entrance for admissions to 19 National Law Universities (NLUs) will be held between 3:00 pm and 5:00 pm.

The two-hour duration, CLAT 2019 will be administered in an online mode as it had been for the last few years.

Further, in the meeting held at the National University of Advanced Legal Studies (NUALS) Kochi on October 3, 2018, the CLAT Core Committee had resolved to have a permanent CLAT Secretariat at the National Law School of India University (NLSIU) Bangalore.

“The CLAT will now be conducted by the newly formed Executive Committee of the Consortium that would have, NLSIU, Bangalore, NALSAR, Hyderabad and NLIU, Bhopal as its ex-officio members, CLAT Convenor of the year, and the CLAT Convenor of the following year and two co-opted Vice-Chancellors of NLUs nominated by the CLAT Convener who have past experience of conducting CLAT,” added the CLAT 2019 Convenor, while informing about the Common Law Admission Test.

The CLAT 2019 will be held for admissions to over 2300 undergraduate and another 600 post graduate law seats offered in the 19 NLUs participating in the Common Law Admission Test.