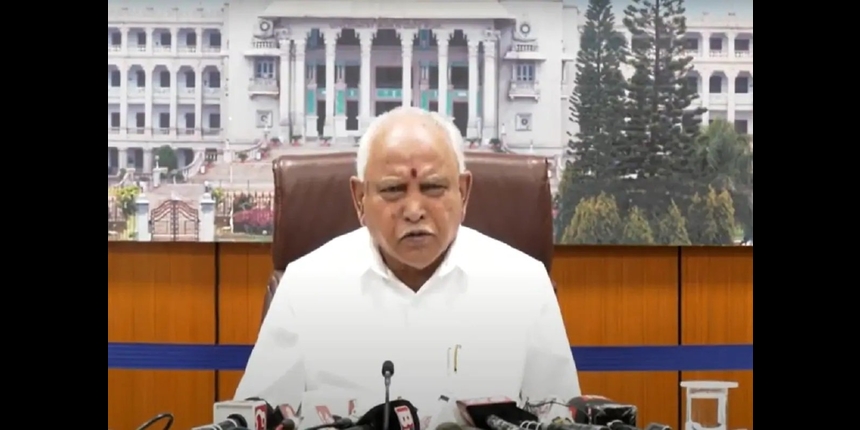 BENGALURU: Karnataka Chief Minister B S Yediyurappa on Friday appealed to the people not to pay heed to the speculation about reopening of schools amid the coronavirus scare.

In a statement, Yediyurappa said there has been debate in favour of and against the reopening of schools and he has also seen the debate on the topic in the media about it.

Besides, political leaders too have expressed their views, he added. Before opening the schools, meetings will be held regarding the pros and cons with the political leaders, experts and senior officials to arrive at a decision, the Chief Minister said.

"Till then, I appeal to the parents not to heed to the speculations regarding the opening of schools and I appeal to the media to spread awareness about it," Yediyurappa said in the statement.

'No hurry to reopen schools'

Earlier, Karnataka Primary and Secondary Education Minister S Suresh Kumar too had reiterated that there was no hurry to start the schools. "Neither our government nor the Department of Education is rushing to open schools under any circumstances. The health and safety of our children is very important to us," Kumar said in a Facebook post.

His comment came against the backdrop of two former chief ministers Siddaramaiah and H D Kumaraswamy asking the government not go open the schools in view of coronavirus cases.

Speaking to reporters here, Kumaraswamy said the government should not be adamant on the issue or budge to pressure from some people who want to make money, and play with the lives of the children and parents. "I will speak to the Chief Minister personally and request him not to budge to any pressure," he added.

Siddaramaiah too, in his letter to Suresh Kumar, has said that under no circumstances should schools be reopened until the situation comes under control. "I suggest that all the students should be promoted to next class in this academic year, and schools can be reopened after consulting everyone once the situation comes under control," he said and suggested that government provide necessary facilities for online classes for all students in the state.

'Debate on reopening schools is unfortunate'

The Centre in its latest 'Unlock' directive has permitted the state government to decide on opening the schools and college from October 15, which has caused anxiety among parents as well as opposition leaders.

Kumar's earlier clarification that government was not in a hurry to open schools did not allay public fear, compelling him to issue a statement afresh. He said many ministers and lawmakers including health minister B Sriramulu, medical education minister Dr K Sudhakar and Siddaramaiah had epxressed their views when he had sought their opinion on reopening the schools about nine days ago.

The Minister termed the debate around reopening of schools as unfortunate when he had only sought the public opinion which was projected as government's desire to open the schools.

"This debate is recurring time and again and I am giving explanation again and again," Kumar said. Insisting that Chief Minister Yediyurappa too had made it clear there is no rush to start the schools and colleges, Kumar said the government's next move will be taken keeping in view the interest of the children and after consulting with all.