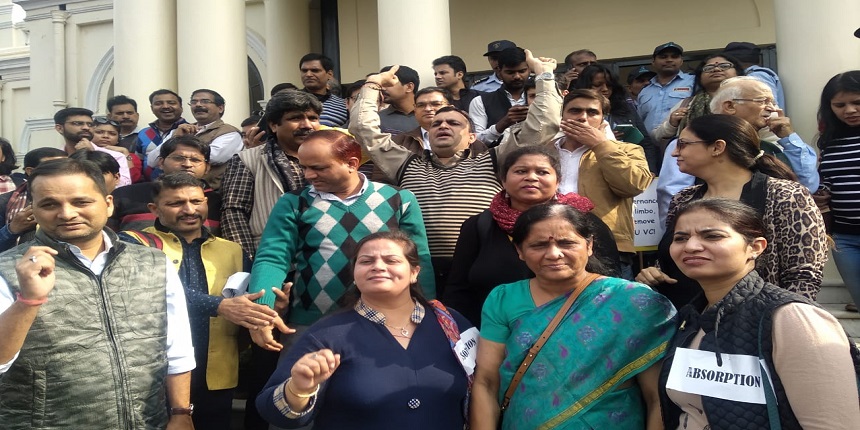 NEW DELHI: The Delhi University Teachers Association (DUTA) has launched an indefinite strike from December 4 over the non-regularisation of ad-hoc teachers. The daily affairs of the university and its affiliated colleges will be hit as thousands of teachers have decided to boycott evaluation, invigilation duties and all other official work.

The association has been demanding the withdrawal of August 28 circular of the Delhi University administration and renewal of the services of all serving ad-hoc teachers. The circular from DU's assistant registrar (colleges) instructed colleges to "fill up the permanent vacancies at the earliest and till permanent appointments are made, colleges may appoint guest faculty, if required, against new vacancies arising first time in academic session 2019-20”.

While the August 28 circular was relevant for “new vacancies”, the Delhi University Principal’s Association, or DUPA, put the joining of all ad-hoc teachers, including those who had been teaching for years, in abeyance. This was the immediate provocation for the indefinite strike and exam boycott.

In a meeting on November 29, DUPA decided to put joining of ad-hoc teachers and disbursal of their salaries in abeyance. The teachers’ association has issued a statement saying the DUPA decision was taken on the basis of 28 August 2019 DU circular which mandates that only appointment of guest teachers can be made against substantive vacancies arising for the first time in the current academic session.

'Quality will be affected'

Delhi University has over 80 colleges affiliated to it but has not conducted a complete round of recruitments in a decade leaving around 5,500 teaching posts vacant. Over 4,500 teachers have been working on ad-hoc basis. The status of ad hoc teacher is different from that of a guest teacher. An ad hoc teacher is appointed for several months, draws a monthly salary and is part of all aspects of a college’s academic life, including evaluation. Paid by the lecture, guest teachers are far more vulnerable. Plus, as a protesting teacher pointed out, they are also less accountable. "Filling posts with guest teachers will affect the quality of education offered at DU," said Alok Singh, an ad hoc teacher at a DU college. "Guest teachers have no accountability. They just take their classes and go. This will also impact the college's NIRF rankings and NAAC ratings." The NIRF refers to the government National Institute Ranking Framework and the NAAC is the National Assessment and Accreditation Council.

The DUTA has been demanding the withdrawal of August 28 letter and has been calling it an attack on the stability of the University and the quality of education imparted by it. It says, “It is completely unacceptable that the Vice-Chancellor, through the 28 August letter, denies the appointment of full-time teachers on ad-hoc vacancies till positions can be filled on a permanent basis. This had already created a difficult situation for colleges. Following this letter, new vacancies arising from retirement or resignation have been kept vacant and consequently, many classes have not been met across colleges and departments in this semester.”

According to DUTA president, Rajib Ray, “The DUTA finds it extremely unfortunate and is anguished to see that the 28 August letter is now being interpreted by the DUPA further to deny livelihood to 4,500 ad-hoc teachers who are already in service and have been working against substantive posts for past several years.”

The teachers’ association which has gone for the indefinite strike from today has demanded the withdrawal of August 28 circular and renewal of the services of all serving ad-hoc teachers. It is also demanding the promotion of existing teachers as the university has not held promotions for the past 10 years. It is also demanding that the approval of reservation rosters that decide which posts will be reserved and for which category, be put on hold as well. The rosters were being redrawn to incorporate the new “Economically Weaker Section” category meant for the upper-caste poor. The DUTA believes that teachers who have been working on an ad-hoc basis for long are likely to get displaced because of EWS reservation.

The DUTA Executive has also decided to continue this struggle till the Union Ministry of Human Resource Development (MHRD) or the University Grants Commission (UGC) does not bring one-time regulation for absorption for serving ad-hoc and temporary teachers.

Update: This story has been updated to include a teacher's comments on the strike.