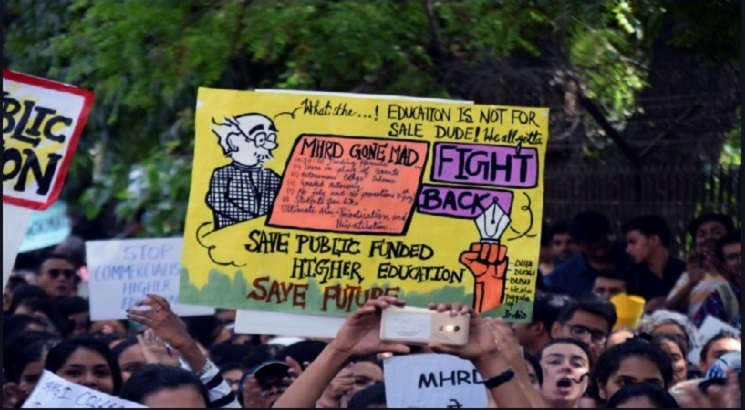 NEW DELHI, MARCH 29: Nearly 15,000 teachers and students took out a protest march in Delhi against the alleged onslaught of Financial Autonomy of the publicly funded universities and changes in the Reservation Rosters on appointment.

The protest march organised by the Delhi University Teachers Association (DUTA) against some the recent regulatory changes brought by the Union Ministry of Human Resource Development (MHRD). The Association has been demanding the immediate and unconditional withdrawal of the Autonomy Regulation and suspension of loan-funding initiatives through Higher Education Funding Agency (HEFA).

The DU community was also joined by teachers and students from Jawaharlal Nehru University (JNU), Jamia Millia Islamia (JMI), IGNOU in the protest. The teachers have alleged that the Government has lately been pussy-footing around the question of public funding in higher education. 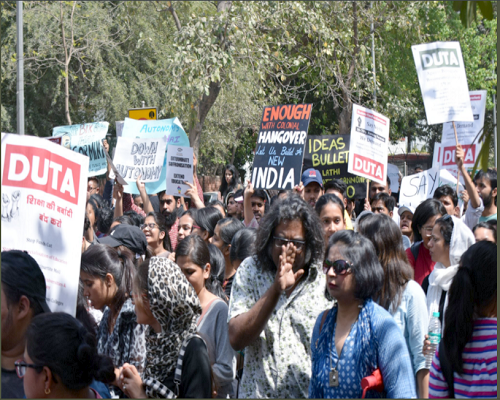 “However, as the UGC regulation on Autonomy and the Finance Minister's budget announcements on HEFA have shown, the Government is keen to withdraw public-funding, impose Self-financing models on public-sector universities and colleges and force them to take loans for infrastructure by mortgaging public resources like buildings and land as collaterals. This puts a question-mark on the affordability of higher education. It also manifests itself in the Government's unwillingness to appoint adequate teachers on the permanent basis, allow fair promotional avenues, and give pensions to retired teachers,” it said.

The Government has also angered the teaching community by notifying changes in the Reservation Roster on Appointments. The new notification insists that departments be considered as units, instead of whole colleges and universities as units.

The DUTA has alleged that the Government has created a situation which will undermine the Constitutional obligation of reservation for SCs/STs/ OBCs and slow down the process of achieving full reservation.

Delhi University has been hit hard by all various issues in recent times, it has started new courses in Journalism, Cyber Security and Strategic Diplomacy on Self-financing mode with teachers appointed on short-term contracts. It is being claimed that this has severely affected the quality of teachers and the student-teacher ratio in the university.

More than 50 percent of its faculty across colleges and departments are working on ad-hoc and guest basis, without any job security or service benefits.