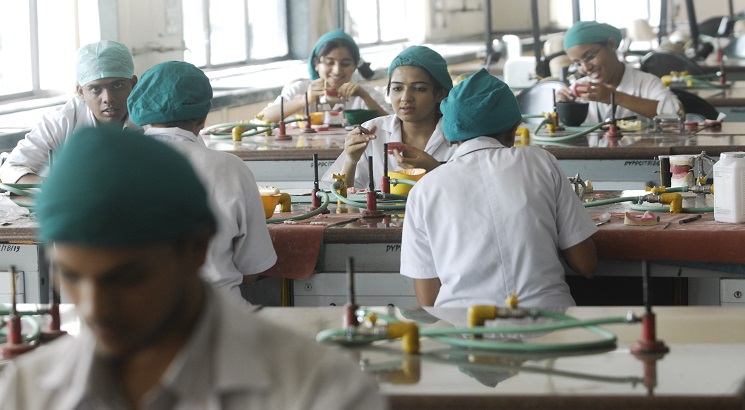 NEW DELHI, MARCH 26: In the year 2018, 17,504 eligibility certificates were issued by the Medical Council of India (MCI) to foreign medical aspirants looking to pursue their medical degree medical institutions abroad. The number of students going abroad has constantly increased over the last few years. MCI has progressively issued higher number of eligibility certificates to students since 2015. The numbers had increased by two and half times in 2016-2017 to 8,737. In 2017-18 the MCI issued more than 14000 certificates. This rise can also be attributed to the one-time exemption granted by the Delhi High Court for qualifying National Eligibility Cum Entrance Test (NEET) to pursue the MBBS abroad.

NEET 2019- a new dawn in overseas medical education
Effective from 2019, a major change in the government rules regarding pursuing medical degrees abroad is that study abroad medicine aspirants students will have to compulsorily qualify NEET. The NEET result will be treated as the eligibility certificate for taking admission overseas. Students are flocking to countries like China, Philippines, Ukraine, Malaysia and Singapore as the costs incurred is comparatively lower than India. This trend has given rise to a new underworld where the student and parents are misguided and cheated through false promises. Students end up in sub-standard colleges and are trapped in a never-ending cycle of exams, re-exam, pay money to get passed and so on.

Compulsory NEET Effect on MBBS education
The Government of India ruling has resulted in a record 15.19 lakh candidates being registered for the NEET UG 2019, a growth of 14.4% against 13.26 lakh last year. The number of students has increased but the number of seats remains the same leading to tougher competition, presently there are 67,352 MBBS seats all over the country. In such a cut throat scenario, a large number of medical aspirants unable to secure a seat, instead of dropping a year, prefer to pursue their dreams at foreign destinations lower fees and quality education. Till now this scenario worked for everybody; it was a win-win situation for everyone, student, parents, overseas education consultants and the regulatory authorities like the MCI or the Directorate General of Health Services.

Trying to cash in on the situation, consultants abroad have started to look for loopholes to exploit the regulation. Some are also going ahead and misleading students by promising them admission to MBBS courses in destinations like the Philippines, without qualifying or appearing NEET. They, however, hide the fact that this degree will not be valid in India, making the students ineligible to appear for the FMGE exam which licenses foreign medical graduates to practice medicine in India.
One of the Board of Governors of the MCI, Dr B. N. Gangadhar reiterated that NEET is mandatory for every Indian medical aspirant. He said, “Nobody should mislead the students by making false promises. However, a student is free to go for medical education abroad without giving NEET, but in that case, they will not be able to come back and be eligible to practice in India. It is also important for a student to get authentic information about the college he is applying to.”

To further clarify their stand on pursuing MBBS or equivalent programme abroad, the MCI (on March 15, 2019) has published a Gazette notification. The notification states that NEET shall be valid for a period of three years from the date of declaration of result, entitling a candidate to pursue MBBS or equivalent medical course.

False Promises
Philippines has seen the highest surge in the number of Indian students looking to study MBBS, due to several reasons with the top being China and Russia tightening their norms for Indian students. The other factors which add to this are low-cost of education and sizeable presence of Indians and English speaking community. This has been aggressively advocated by the private Indian education consultants as well. It has also been found that many a time, the consultants mislead the students to take admission at a sub-standard college, without proper infrastructure, faculty and other necessary facilities. A young aspirant, just out of school, lands in a different environment in a different country, without any option available gets confused. The only way-out is by paying money, to pass in class and practicals, money for accommodation, food, etc.

Over a dozen Indian students in a YouTube video share their plight. The students claim that the agents either did not inform them about NMAT exam or have fleetingly refered to it as a formality or some kind of ‘setting/understanding’ with the college which the student will qualify easily. The reality is quite different when the student reaches the college. The rules are stricter and they need to score a minimum of 40% in NMAT. By the time reality dawns on them, the student has already paid (Rs 75,000-1,00,000) to the medical school.

The students in the video also claim that they come to the Philippines on a tourist visa instead of student visa. All important documents are later taken by the agents or by the college creating a huge problem for them.

Careers360 contacted the Philippines Embassy in India over the issue, the Consular Section of  Philippine Embassy in India replied that this is a private contractual matter between the consultancy and the student, and is not within the purview of the Embassy's consular/visa duties. However, it cautioned the Indian students and advised that to do ‘the necessary research/vetting and ensure that they enrol in a reputable school in the Philippines.’

Conclusion
A focussed research into each aspect of a foreign medical degree is advised to the students as well as their parents. Students should find out the course details, the degree providing university, their validity, the actual process of admission, visa regulations, fee charged etc about an institution before finalizing one. Blind faith in the education consultant should never be exercised.
The Indian Embassy in Manila has also issued advisory to Indian students seeking admission in educational institutions in the Philippines following complaints regarding unscrupulous agents enticing Indian students for seeking admission to medical and other courses.
The Embassy Advisory reads, “Students are advised to check before taking an admission that the curriculum and standards of the educational institution in the Philippines meet with the requirements of Medical Council of India to enable their registration upon completion of their studies. Students are strongly advised to remit their admission and tuition fees, hostel and boarding dues directly to the bank account of the university they are seeking admission in and not hand over any money to the agent as it has been reported that many agents are defrauding the students by not depositing it in the university’s account.”