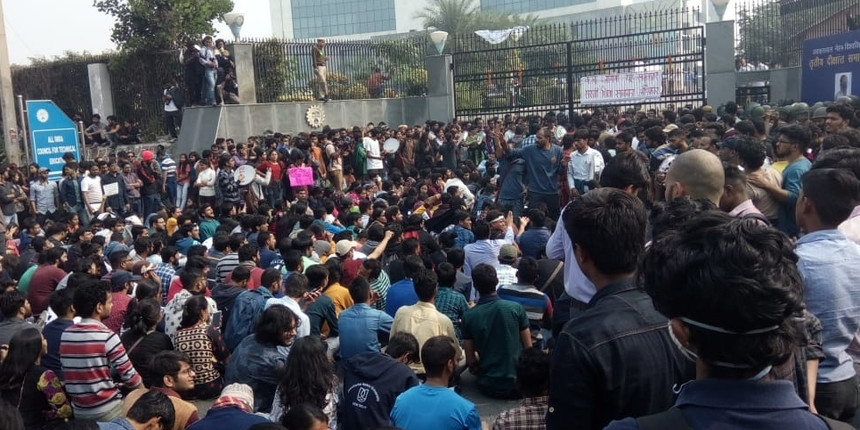 NEW DELHI: After days of student protests, the Jawaharlal Nehru University’s Executive Council made some changes to the new hostel fee structure on Wednesday, November 13.

Surprisingly, the decision was not announced by the university authorities but by secretary, higher education, R Subrahmanyam.

Subrahmanyam tweeted: “JNU executive committee announces major roll-back in the hostel fee and other stipulations. Also proposes a scheme for economic assistance for Economically Weak Students. Time to get back to classes.”

The administration in a press release issued later on Wednesday evening stated that the council has decided to drop the clauses concerning curfew timings and dress code from the new hostel manual draft. Regarding the other major issue of fees, the release said that students belonging to the Below Poverty Line category will be eligible for 50% concession in utility (water, electricity) and service (mess, sanitation, support staff) charges. For the rest, charges will be as per the actual cost and, therefore, unsubsidised. The increase in room-rent also stands but now comes with concessions for BPL students. The refundable security deposit goes back to being Rs. 5,500 from Rs. 12,000.

On November 11, student protests had kept the HRD Minister Ramesh Pokhriyal ‘Nishank’ inside the auditorium of All India Council for Technical Education for several hours. He was attending the JNU convocation.

The Ministry of HRD officials did not respond to queries on how "BPL category" was defined. However, a JNU student pointed out that at present, the income limit for being placed in the category is Rs 27,000 per year.

Students, however, believe that the government is trying to save their face with some minor tweaks.

“What are the details of the rollback? The major component and the policy of students paying service charge has not ended. 95% fee hike remains. The government is just trying to save its face,” said former JNU students’ union president, N Sai Balaji. “The major portion of fee hike remains. Service charge component is principally there and the fee hike also. What have they changed?... They tinkered with [a] few numbers and tried to put out a face saver. But in reality there is still a fee hike.”

The JNU Teachers' Association, too, issued a statement saying: "It is absolutely clear that there is no rollback of the shift to an entirely self-financing model of running the hostels." It further said, "The increase in monthly charges for most students will remain at around Rs. 3,000. This will be an exorbitant increase for several students even if they are not in the BPL (below poverty line) category....Even fr BPL category students, the increase in charges will be to the order of Rs. 1,500 per month immediately - a burden which no BPL household can possibly bear."

In a scathing comment, the JNUSU vice-president, Saket Moon described the announcement as a "rustication order" for poor students.

The council decision came against the backdrop of high drama as teachers and students accused the Vice-Chancellor of conducting the meeting in an “undisclosed location” to exclude their participation.

“Some of the members were approached by a security official who told them to accompany him to an undisclosed location, without any official communication of the same,” said a statement issued by three elected teachers representatives in the EC, Sachindanand Sinha, Moushumi Basu and Baviskar Sharad Pralhad.

The administration in the press release said that "a crowd of students gheraoed three EC members who also happen to be the deans of different schools, as a result, the venue of the meeting had to be shifted to an alternative place".

Update: This copy has been updated to include details and statements given by the JNU administration, the JNUSU and JNUTA