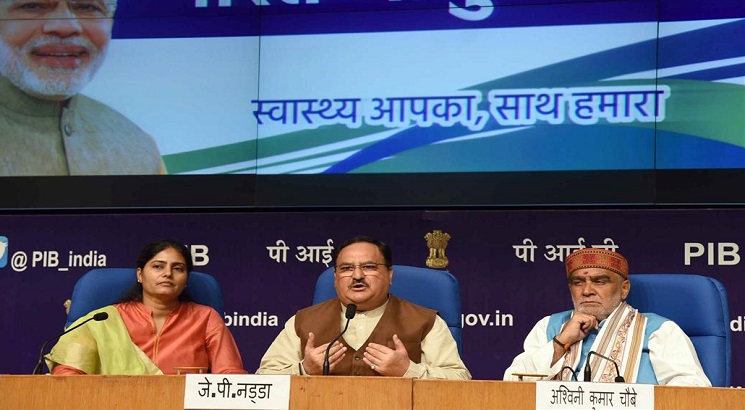 NEW DELHI, SEPTEMBER 27: Non-compliance of the Supreme Court appointed Oversight Committee (OC) instructions and misinterpretation of the apex court’s order are the primary reason for the ‘Ordinance’ issued by the President of India to supersede the Medical Council of India (MCI).

The Union Ministry for Health and Family Welfare (MoHFW) has said that the Oversight Committee was unable to function due to non-cooperation of the MCI and the National Medical Commission (NMC) Bill also pending in the Parliament and its passage is likely to take some time, ‘certain immediate steps are required to be taken’.

The Union Minister for HFW, J P Nadda has welcomed the Ordinance to supersede the Medical Council of India (MCI). Nadda in a statement has said that the Ordinance will strengthen medical education in the country.

Yesterday, the President of India through an Ordinance has superseded the MCI and asked the Government of India to appoint an expert committee to look after the work of the Council. He said that “The powers of the Council have been vested in a Board of Governors (BoG). It is expected that the BoG will bring about urgent and much-required reforms in the field of medical education.” Further, he added: “I am happy that professionals of great eminence, who were earlier part of the Oversight Committee formed by Hon. Supreme Court, will constitute the BoG and I am sure they will work towards enhancing access to quality health care for all.”

The Health Minister stated that the Government of India has been committed to improving the health care of all, particularly the poor and deprived sections. The country has faced several challenges in the health sector: high levels of out of pocket expenditure and catastrophic expenditure that impoverished people due to inadequate public health infrastructure and limited access and coverage of essential and life-saving interventions. During the last four years, several measures have been taken to systematically address these challenges.

Nadda stated that to enable holistic health care to citizens with a focus on poor and vulnerable, the Government has launched the ambitious Ayushman Bharat, with its twin pillars of comprehensive primary health care through Health and Wellness Centres (HWCs) and the PM-JAY.

“By 2022 we will create over 1,50,000 Health and Wellness Centres so that primary health care including prevention and health promotion is universal, accessible and equitable”, he elaborated.

Nadda said, “For years poor people have to travel from far of places to Delhi for getting tertiary care facility at AIIMS. Priority of the government is to expand quality tertiary healthcare facilities in all parts of the country. With the announcement of 14 new AIIMS over the past 4 years, the total number of AIIMS will go up to 22. Further, super-speciality Blocks are being set up in 54 medical colleges at a cost of around Rs 9,000 crores.

The Government of India in order to improve the availability of tertiary care and expand access to medical education in underserved areas is setting up a network of medical colleges all over the country. The Heath Minister in his statement stated, “82 new Medical Colleges costing Rs 16,000 crores are being set up under a centrally sponsored scheme to ensure that there is at least one college for every three parliamentary constituencies.”

Nadda said that the ambitious programmes and policies of health care could not be made a reality without ensuring the availability of the required number of qualified doctors and other healthcare professionals. Realizing this need, the Government has attempted to bring about reforms in medical education.

National Medical Commission Bill, 2017
Highlighting the role of the National Medical Commission Bill, 2017 which was introduced in Lok Sabha in December last year. Nadda said that the Bill provides for simplification of procedures and is expected to spur rapid growth in the number of UG and PG seats in the country besides enhancing the governance and quality of medical education. The NMC Bill provides for distribution of functions among four autonomous boards whose members would be persons of proven ability selected through a transparent process.

The Bill was taken up for consideration in February this year and was referred to the Department related Parliamentary Standing Committee on Health & Family Welfare for examination. The Parliamentary Standing Committee presented its Report on the Bill to the House on March 20 with its recommendations. The Ministry after examining the recommendations obtained approval of the Cabinet on March 28 for moving official amendments. Thereafter, the Bill is pending in the Lok Sabha.

Meanwhile, Supreme Court in its judgment dated May 2, 2016, issued directions to the Central Government to constitute an Oversight Committee (OC) with the authority to oversee all statutory functions of MCI till a new legislation comes in.

Prelude to Ordinance
An Oversight Committee (OC) was constituted after the SC order whose term ended in May 2017, subsequently, another OC was set up with the approval of the Supreme Court. This OC was chaired by Dr V K Paul and included Directors of AIIMS Delhi, PGI Chandigarh, NIMHANS.

On 6th July 2018, OC cited instances of non-compliance of their instructions by MCI and said that MCI has not only misinterpreted orders of the Supreme Court but has also challenged the authority of OC. Subsequently, all members of OC have resigned.

As per the MoHFW statement, “In such circumstances when the Supreme Court mandated Oversight Committee is unable to function due to non-cooperation of MCI and the NMC Bill is pending in Parliament and its passage is likely to take some time, certain immediate steps are required to be taken.”

Accordingly, an ordinance to supersede the MCI has been promulgated and the powers of the council have been vested in a Board of Governors (BoG). The BoG will continue to perform till a Council is constituted as per the provision of the Act in one year time. It may be recalled that a Board of Governors was also appointed in 2010.

Nadda said, “All the BoG members are eminently qualified and apolitical. Further, five of the seven members were the members of the Supreme Court appointed Oversight Committee. It is expected that the BoG will bring about urgent and the much-required reforms in the field of medical education and promote access to quality health care for all the people of India.”