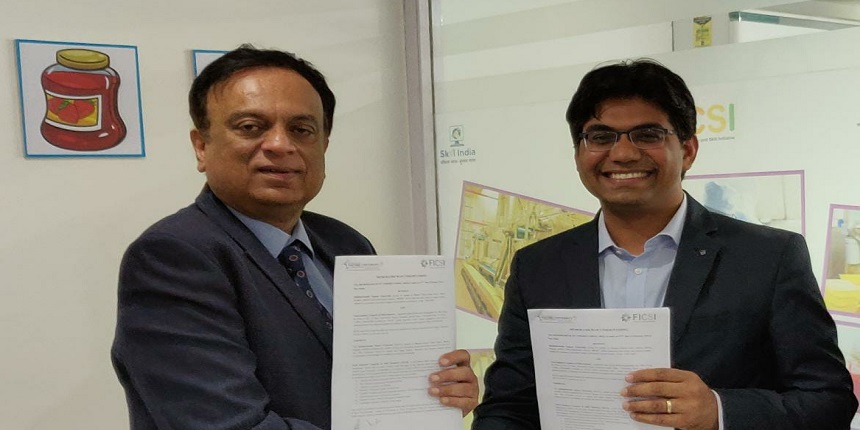 NEW DELHI, APRIL 12: Bhopal-based Rabindranath Tagore University (RNTU) has signed a Memorandum of Understanding (MoU) with the Food Industry Capacity and Skill Initiative (FICSI) to establish Madhya Pradesh’s first Centre of Excellence (COE) in Food Processing at the University. The Centre will aim to train manpower for MSMEs and startups in various subsectors of food processing, along with building entrepreneurial capabilities in the State.

FICSI is the Sector Skill Council for the Food Processing sector and has been formed under the aegis of the National Skill Development Council (NSDC) and Federation of Chambers of Commerce of India (FICCI) as an initiative to promote skill development.

Under the partnership, RNTU will impart training in Food Processing based on FICSI’s Qualification Pack (QP) as the training curriculum for the students. FICSI will conduct assessment and provide certification to the trained students. In collaboration with RNTU, FICSI will also organize the ‘Train the Trainers’ programme. The two organizations will also collaborate for various initiatives under Skill India, especially the National Apprenticeship Promotion Scheme (NAPS). FICSI will also support RNTU for creation of a B.Voc program in Food Processing as per the guidelines of the Ministry of Human Resource Development.

Talking about the need for skill development in Food Processing in India, Nitin Vats, Director-IQAC, RNTU, said, “Food processing has an important role to play in linking Indian farmers to consumers in the domestic and international markets. The Processed Food market is expected to grow to $ 543 billion by 2020 from $ 322 billion in 2016, at a CAGR of 14.6%. This will see a spike in the requirement for trained food processing professional across the food industry sectors.”

This partnership is expected to boost the University’s efforts to bridge the overall skills gap in higher education and improve employability in Madhya Pradesh. Formerly known as AISECT University, RNTU was launched in 2012 as India’s first Skills University where skill credits are a mandatory part of the course curriculum. Over the years, the University has introduced 51 types of skills as electives across all the disciplines. These electives are in addition to normal subjects and core related elective subjects. To make skill delivery effective, these skills are offered through Skill Academies established as autonomous entities under the various Departments at RNTU. Many of these skills are aligned with National Skills Qualifications Framework (NSQF). The University has also established a Pradhan Mantri Kaushal Kendra (PMKK) under the Skill India Mission to empower the youth.