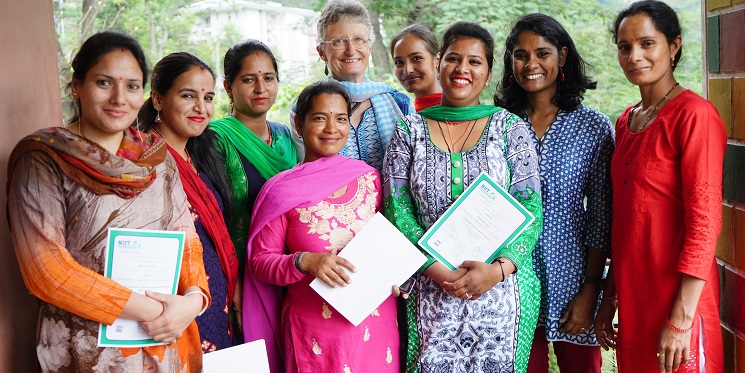 EWOK partners with women from the four panchayats of Kamand, Kataula, Katindhi and Navlaya in Mandi district. The First batch of seven women, certified in basic computer literacy, Spoken English and Personality Development, graduated in May 2018 and a Convocation program was held on 28th June.

EWOK offered two certification courses in collaboration with NIIT Foundation. The basic computer literacy certification covers training in MS Office and introduction to Internet that includes online ticket booking, banking, enrolling to open universities and looking up Aadhar card details and so on.

The certification in Spoken English and Personality Development concentrates on improving their English conversational skills as well as developing one’s personality that would help them in interacting with various cultures.

Speaking about the importance of this initiative and the commitment of IIT Mandi to development of local community, Dr. Priscilla Gonsalves, Chief Advisor, EWOK, said, “Arriving at Kamand Valley for the first time in 2010, the director and I found a traditional, Himachal community. We realized that the growth of a new IIT in the valley would have a major impact on the lives of locals.”

Further, Dr. Priscilla Gonsalves said, “EWOK strives to ease the transition for local women by providing guidance, training and information. It has also helped bridge the gap between the largely urban, technologically oriented IIT community and the local agricultural community. Both sides have benefitted from the link. In future we hope to have closer ties as we work together to build a new Kamand.”

Two of the women who graduated have landed paid internships and a third has applied for license to take up contractual work for landscape development.

Each of these courses are conducted for three months with daily classes of two hours each. The certification is provided after an assessment by external examiners from NIIT Foundation team.