SNAP 2019 postponed in Dibrugarh, Shillong & Guwahati due to CAB protest 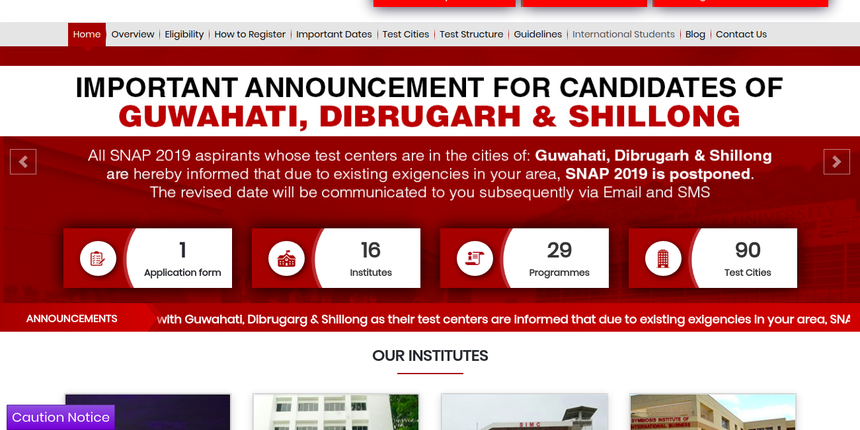 NEW DELHI, DECEMBER 13: Symbiosis International (Deemed University) has issued a notification on its website that SNAP 2019 has been postponed for candidates of Guwahati, Dibrugarh and Shillong owing to the existing exigencies. Protests had erupted in the northeastern cities owing to the recent passage of Citizenship Amendment Bill in both the houses of parliament. Though there has been no such mention about the exact cause of postponement of SNAP exam in the three cities, it is probably because of the ongoing turmoil against CAB. Meanwhile, the exam will be conducted in other cities on December 15 and there has been no other change for them.

Announcement of New Date for SNAP for candidates of Dibrugarh, Shillong & Guwahati

Symbiosis International (Deemed University) has assured the students who would be appearing for SNAP 2019 that they would be informed about the new dates through email and SMS.

SNAP 2019 will be conducted in computer based mode on December 15 in 87 cities now. The three cities where the exam will be held later on Guwahati, Dibrugarh and Shillong. There has been a change in the exam pattern of SNAP as previously there were supposed to be four sections but this year questions will be asked only in three sections. The entrance exam would be conducted in computer based mode and the shortlisted candidates will be offered admission to the participating institutes of SNAP.