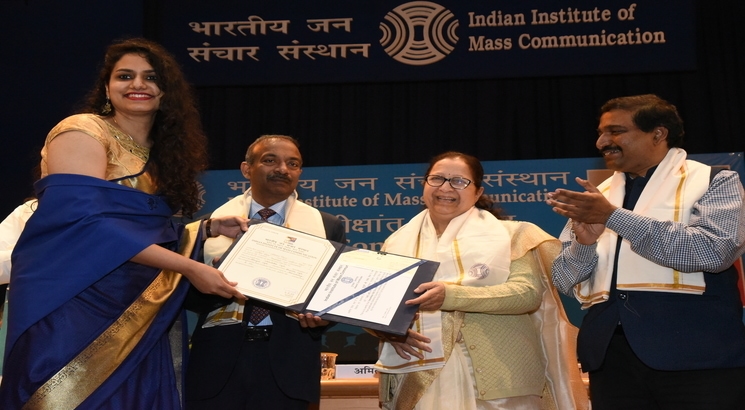 The Lok Sabha Speaker was attending the 51st Convocation Ceremony of IIMC at New Delhi. Sumitra Mahajan said, "Media draws enormous power, but it also has the responsibility of shaping a good society." She also appreciated the encouragement being given to journalism courses in regional Indian Languages, observing that communication becomes most effective when it is undertaken in one’s own language.

Sumitra Mahajan complimented IIMC and the Shri Lal Bahadur Shastri Rashtriya Sanskrit Vidyapeeth for introducing the first ever Sanskrit Journalism Course. She said, "Sanskrit is the mother of many Indian languages and also has close linkages with some other foreign language". A Sanskrit website was also launched at the event at sanskritnews.com

KG Suresh, Director General of IIMC said, “In the 9-month diploma program we groom our students to become ‘industry-ready’. We organize workshops for the students and allocate a lot of assignments to hone their writing capabilities. We also impart technical training to our students so that they are able to produce lab journals, documentaries as well as radio and television programmes on their own.”

In all, 333 students were conferred Post Graduate Diplomas by the Chairman, IIMC and Secretary, I & B Amit Khare. These included 136 in English Journalism, 64 in Advertising & PR, 45 in Hindi Journalism, 41 in Radio & TV Journalism and Odia (16), Marathi (15) Malayalam (11) and Urdu (5) and Sanskrit (12). Earlier Sumitra Mahajan also unveiled the plaque of the Atal Bihari Vajpayee Marg at IIMC.