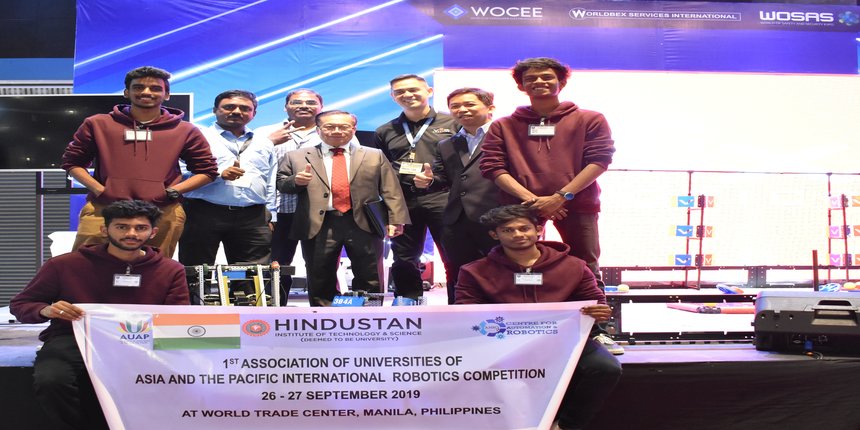 New Delhi, October 16, 2019: The students of B.Tech. Mechatronics Engineering Department at the Hindustan Institute of Technology and Science (HITS) developed the VEX mobile robot and has succeeded in obtaining the “Design Excellence Award” at International VEX Robotic Competition.

The International VEX Robotic Competition was held at Manila, Philippines during the 26th and 27th of September 2019 and was organized by the Mechatronics and Robotics Society of Philippines (MRSP) in association with the Association of Universities of Asia and the Pacific (AUAP). The “Design Excellence Award” has been given to the winning team by Prof. Dr. Ricardo P Pama, Secretary-General of AUAP, Mr. Philip Marvin D. Joven, Chairman, MRSP and Mr. Andy Lee, President, Innovation First International (VEX Robotics).

A total of 16 teams from Asia Pacific and the Philippines participated in the robotics competition. HITS Team was declared as a winner due to its innovative design approach of robots and autonomous navigation capabilities. The team has four members - Lena Sekar, Gian Carlo, Haran Pragadeesh, Mukesh Sriram who were sponsored by the School of Mechanical Sciences. Hindustan Institute of Technology and Science (HITS), Chennai is a core member of the Association of Universities of Asia and the Pacific (AUAP) and the management of this University funded the entire project.

According to Lena Sekar, the team lead, the problem statement and the design of the autonomous mode of a mobile robot for the competition were really challenging for them but in the end, it provided them with a wonderful learning experience.