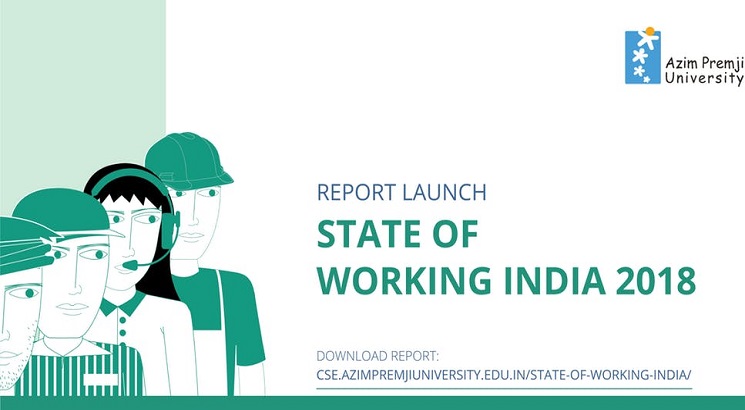 NEW DELHI, SEPTEMBER 26: India has struggled to convert its high rates of economic growth into good jobs. Currently, a 10% increase in GDP results in less than 1% increase in employment. The rate of unemployment among the youth and higher educated has reached 16%, states ‘State of Working India’(SWI) report by Azim Premji University.

The report finds that while wages in most sectors have grown steadily, caste and gender disparity remain high. Labour productivity has grown several times faster than wages. As a result employers have benefited far more from growth than workers. Employment generation has remained weak, and India has struggled to convert high rates of economic growth into good jobs, particularly for its educated youth.

Highlight the revival in organised manufacturing sector, the report states that past decade has been good for the performance of the organised manufacturing sector. Several industries (especially, big employers like knitwear, plastics, and footwear) have delivered on wage growth and job growth. In part this is because workers are no longer being replaced by machines as fast as they were in the 1980s and 1990s.

Anurag Behar, Vice Chancellor, Azim Premji University speaking about the report said, “Just and sustainable livelihood opportunities for all its citizens are critical for India. Azim Premji University’s State of Working India report is based on rigorous research and investigates a range of issues that can drive employment growth in the country, with equity and full inclusion. We see this report only as a first step, with deep, continuing and on-the-ground research required. Collaboration across institutions and sectors will be key for developing a robust and detailed understanding.”

As per the report, there has been steady growth in wages (adjusted for inflation) for the past decade and a half. Most sectors, except agriculture, have reported an increase in real wages by 3% or more annually. However, monthly earnings continue to be low in general. 82 % of male and 92% of female workers earn less than Rs.10,000 a month.

Amit Basole, lead author of the report and faculty at Azim Premji University, noted that “The report analyses the structural problems that have prevented adequate employment generation over the past several decades, and does not limit itself to just the past few years.

The State of Working India presents well-researched and analytically useful data on India’s labour market by bringing together researchers, journalists, civil society activists, and policymakers. The report compiles evidence from many different official surveys as well as field studies to shed light on the quantity of employment and unemployment, the sectors and industries that are creating jobs, the states that are performing better, the quality of jobs, and the effect of caste and gender disparities.