“When we participate, we not only bring in money, but our time” 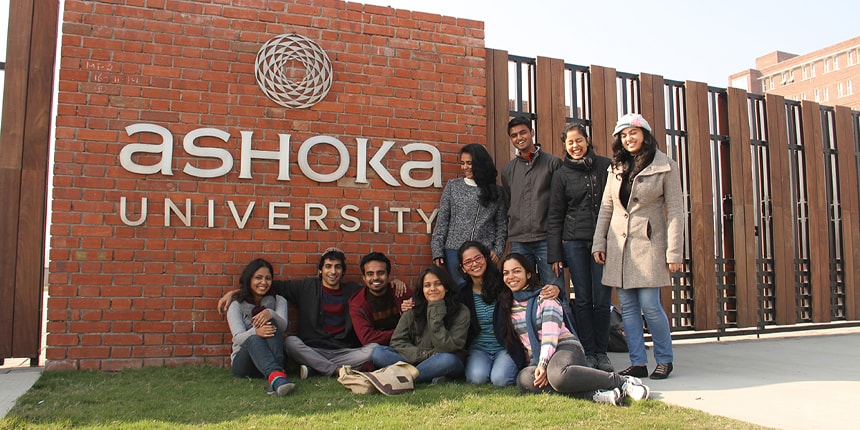 Just over five short years since its establishment in 2014, Ashoka University is making waves in the Indian higher education space. In a pioneering effort, the not-for-profit State private university offering liberal education was founded with an ambitious vision — to become a world-class institution at par with global standards of academic rigour with an interdisciplinary approach to learning, led by an internationally renowned faculty.

It is a place where students are nurtured and equipped to become critical thinkers, changemakers and leaders. Students who have a sense of curiosity, an open mind, a varied set of ideas, would really mean a lot for the society and the country. In a nutshell, Ashoka University is India’s very own offering for a student aspirant wanting to experience Ivy-league education. Still in its early days, the young university is already shaping minds and changing the ground rules.

Now sprawled across a fully-residential, 25-acre campus amidst the open fields of Sonepat, Haryana, Ashoka University started out as a passionate dream in the minds and hearts of a handful of new generation entrepreneurs and academicians. When Sanjeev Bikhchandani, Founder and Vice-Chairman of InfoEdge that runs Naukri.com, Ashish Dhawan, Founder and Chairman of Central Square Foundation, Pramath Raj Sinha, founding dean, Indian School of Business, and Vineet Gupta, Managing Director, Jamboree Education, came together, what they saw was a huge gap in higher education in India. Legacy Indian institutions were beginning to lose their edge, pointing to a glaring need to reinvent academic excellence. India needed a fresh start to spark change in the system. Thus, was born Ashoka University.

A case of collective philanthropy

It was clear from the beginning that things were going to be done differently at Ashoka University. What is most interesting and effective is its approach to governance and funding. Unlike many private Indian institutions that are family run or personality-driven, and quite akin to many of the best institutions in the West, Ashoka University is an endeavour in collective philanthropy.

The vision of a few became the reality and contribution of the many. From a handful of initial founders, Ashoka University is today funded by a whopping 126 individuals and corporations. “There are ways in which you can work together to build great institutions. Collective philanthropy allows incremental institutions with interesting models to come up, it allows professionals like us to participate. When we participate, we not only bring in money, but our time. We roll up our sleeves and contribute,” exclaims Amit Chandra, Managing Director, Bain Capital and Founder and Trustee at Ashoka University.

The model of collective philanthropy has not only streamlined an uncompromising governance structure but also allowed people with different backgrounds who can contribute different things to come together and give the best of what they can. Beyond financial support, most of the founders are deeply involved in many ways. They are able to contribute their time and efforts towards faculty building, fundraising and developing international linkages, to student outreach, curriculum development, placements and more. While some are on-board full-time, yet others have dedicated significant amounts of their time to Ashoka, besides their own professional commitments. Over the years, they have shared the burden, handed off responsibilities to each other and learned from each other. Most importantly, the diversity of backgrounds and different pools of excellence make the whole greater than the sum of the parts in such a journey.

Funding in the early days

“When we started in 2011, Ashoka was a concept with very few ready to back it financially. Many saw the idea of building a new research based university in the true liberal tradition as just too esoteric. Others thought it a good idea but impossible to execute in the Indian environment. But as the idea became reality, helped in part by the original pool of capital contributed by a few true believers, and people started seeing buildings, students, faculty and a growing reputation, more people were willing to join the effort,” says Founder and Trustee, Siddharth Yog, who is also Founding Partner of The Xander Group.

“In the past we refused significant amounts of money because it came with riders or had an agenda different from our core mission. Irrespective of how much one contributes in money or time, you get one voice, and cannot alter the original mission. That is how this collective philanthropic effort around the original unshakeable idea of a liberal university providing foundational learning was conceived. Not even the governing body can change the founding principles of Ashoka. Those are cast in stone,” adds Yog, who, like all stakeholders, is a firm advocate of the institution’s integrity.

An opportunity to give back

A part of understanding Ashoka’s success lies in understanding the very idea of philanthropy, taking a peek into the minds of the people behind the mission. What drives a successful entrepreneur or professional to invest his wealth in a not-for-profit organisation? What were those defining moments in their lives that inspired them to give back to society?

For some, it was the quality of their own education. Many have benefitted from high quality education, scholarships and international exposure in their formative years and enjoyed huge successes in their lives. Having witnessed the generosity of others, it seems a natural inclination to consider education as the field to give back.

For others, it was the inspiration of educationalists. “It was very clear to us that education was really a differentiator in our own personal lives and experience. We were very fortunate to have gone to good schools with very inspirational teachers. They inspired us not just within the field of academics, but to look at life with a broader perspective. That stayed with us. It has helped us in being able to accomplish what we wanted to over those years,” says Rahul Mookerjee, who made the decision to join Ashoka within just six short weeks of his first meeting with the initial founders, and a visit to the campus then under construction.

All believed in the ability of education to have a profound impact. Just as you’re driven to build businesses, you have to be driven to impact society and to solve social sector problems.

Even if you want to look at an investor getting a high ‘return on investment’, it is very much possible in the field of education — just not in the fiscal sense. A donor has the ability to transform not only the life of an individual or even a family, but entire communities. “I think it’s the biggest bang you can get for your buck today in India because sadly there is so much to be done. It’s a completely open field! There are very few fields like education where you can just go in and make such a big difference,” says Mr. Mookerjee, who is interestingly also Managing Director at YoNao Capital. This kind of satisfaction or ‘return’, even an investment in private equity, can never fetch.

Committed to inclusion and diversity, Ashoka University is set to introduce 100 full scholarships this year. More than 50 percent of students are on some form of financial support, a first for any institution. The head of the alumni association is the daughter of a beedi worker — Ashoka University is ensuing that nothing comes in the way of a deserving student to receive a world-class education. Chandra recounts meeting a first-generation learner who had stepped out of her village in Tamil Nadu for the very first time, thanks to the scholarship programme. Five years later, she went on to deliver a TED talk at Florida. “When you see that journey, see how education is capable of transforming a person by the opportunity it provides, it’s very humbling. We are generating real change makers, who are capable of solving problems that will change societies at the end of the day. At the same time, we are generating people who will be the next CEOs,” he notes, looking at the spectrum of opportunities, ideas, careers and paths a liberal education provides.

A pioneering effort in liberal education

Liberal education is an approach to learning that empowers and teaches an individual to prepare and deal with the complexity, diversity and changing world that is all around us. Ashoka University offers a broad foundational knowledge of the world, as well as focusing on an in-depth study in a specific area of interest. While liberal education has been well oiled in the West, particularly the United States, the Indian higher education landscape was creaking for change.

“What got many of us early investors interested in Ashoka was the opportunity to build something world-class in India, a pioneering effort. Rarely do you get the chance to start something complete from a clean slate. The sheer quality of people together to execute that plan, that audacious goal, really seemed like a fabulous opportunity,” admits Chandra.

The first thing to understand is that building any successful organisation is difficult, but building a successful organisation that does not have a profit mode is even more difficult. Profit made motives simplify things tremendously; you know exactly what you’re looking at. To rise to the challenges of a not-for-profit, you need to seek out the best as partners and stakeholders to build the effort. This is something that may come naturally for many young, new generation entrepreneurs, who even in their own initiatives are often collective. Coupled with the desire to give back, this paves the way for a very easy transition to move to collective philanthropy.

“Focus on an area where you believe you can make a difference and start early! You don’t have to wait till you’re really successful. When somebody writes a cheque for a philanthropic initiative — no matter what the amount — it’s a magnificent gesture. Do what you can afford, it doesn’t matter whether it’s time or capital,” encourages Yog, who early in his career, donated $11 million to his alma mater, Harvard University.