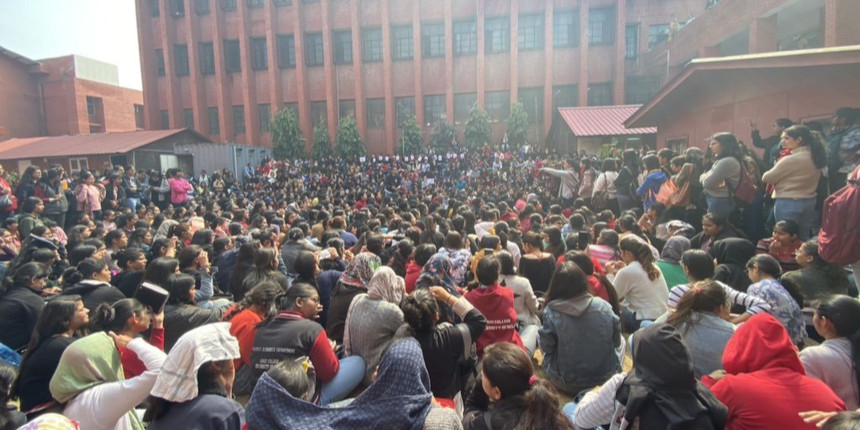 NEW DELHI: The Delhi Commission of Women (DCW) has issued a notice to the Delhi Police and Gargi College on Monday for their inaction after students alleged molestation by unknown men on college premises on February 6.

The DCW chairperson, Swati Maliwal also met the students of Gargi College who are currently staging a protest against the police and college authority’s inaction. Their complaint reached the Parliament on February 10. The Union minister for human resource development, Ramesh Pokhriyal ‘Nishank’ told Parliament that the incident is “being investigated” and that “outsiders” were declaring the result of what happened.

Speaking to Asian News International, Maliwal said: "We have issued notices to Delhi Police and Gargi College for inaction. We will conduct an inquiry of our own into this incident. We demand detailed investigation and arrest of the accused,"

On the last day of the college’s cultural festival, ‘Reverie’, a group of men allegedly broke the gates and forcibly entered the college. The social media posts by Gargi College students alleged that the men groped and molested them.

A student told Indo-Asian News Service, "I can't confirm the allegations of molestation but a large group of drunken men had dropped in and manhandled students."

Apparently, a contingent of Delhi police and Rapid Action Force were deployed close to the place from where the men allegedly gate-crashed the cultural festival. According to The Indian Express, Delhi police have started a probe and CCTV footage is being examined.

"They stood there watching. It has been four days but the police and the college have kept quiet about it. They cannot shrug off the responsibility of investigating incidents of sexual harassment and molestation that took place on campus on February 6," Maliwal told Press Trust of India.

The principal of Gargi college, Dr Promila Kumar spoke to ANI on the matter. She said: "We've set up a high-level fact-finding committee to meet with the complainants, eyewitnesses and any other person having relevant information."

She has urged the students to approach the Internal Complaints Committee of Gargi College for a confidential inquiry. She has also ensured that a security protocol will be put in place to prevent such incidents from happening again in future.

Clarification: This copy has been updated to include information in more recent media reports.