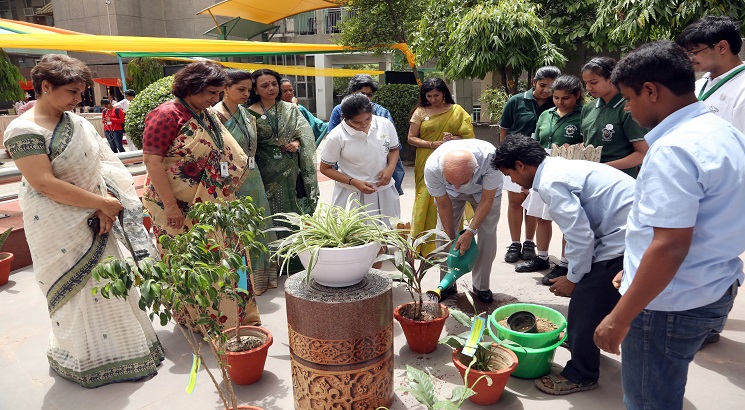 The Festival was designed to inspire awareness and appreciation of the Earth’s environment. The theme of the event was ‘Save Earth’, with special emphasis on the 5 ’R’s – Reuse, Recycle, Reduce, Restore and Replenish. It witnessed the participation of 79 schools.

A collaborative effort of the Environment and Geography Clubs of the school, the festival comprised 9 competitions- 5 off-site, including Book of Ideas – 1, Weave A Story (Photography), Green-o-tisement (Advertisement), E-File (Bio-Diversity File) and Scroll-A-Message; and 4 on-site, which were Book Of Ideas -2, Model Making : Green City, Let The Silent Earth Speak : Mime and Waste-Wise : Collage Making.

Vanita Sehgal, Principal spoke of the dilemma of the issue not spoken about: “who cleans the garbage and when?” She feels that we do little but expect others to do everything. She said if people feel they are too small to be effective then they have never been bitten by a small mosquito. She quoted a line – `Nothing comes from nothing’ to encourage children to go out of their comfort zone to make a difference.

The Chief Guest, V.K. Shunglu, shared his thoughts on ploughing back grass into the soil to ensure that essential nutrients aren't lost. He mentioned the purchase of a new mower which recycles grass, thereby enabling rejuvenation of the soil.

Vrinda Sarup considered it to be a privilege and a delight to attend this environmental festival. She found the ideas and works to be breathtaking and complimented the teams on their ideas and concerns. She even promised to support them and expose them to a wider audience.

Shunglu released the Report on Pollution Survey in Delhi prepared by Class X1 students of DPS RKPuram. He also released the Book of Ideas Part 1, a collection from all Delhi Public Schools bound together.

The speeches were complemented by a Panchtatva themed dance, backed by visuals and followed by soulful, warm voices of the western music choir.

Shunglu, Sehgal and Sarup distributed the prizes and congratulated the winners. Being the host team, DPS RK Puram participated but did not compete in any event.