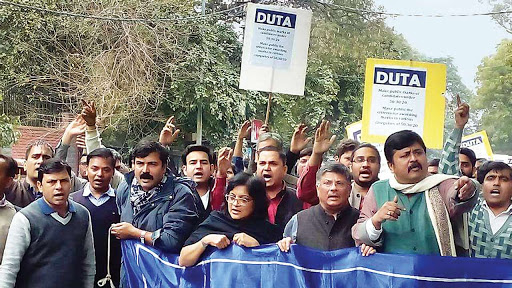 NEW DELHI: Delhi University teachers staged a protest outside the Vidhan Sabha on Monday against the "continuous inordinate delays" in release of adequate grants to 12 colleges that are fully funded by the city government.

"Despite the denial of the mandatory police permission for today's protest, the DUTA went ahead as the employees did not have any other option but to take this drastic, medically unwise step to come out and physically protest," the Delhi University Teachers' Association (DUTA) said.

Employees of some of these colleges have not been paid salaries since the month of May, it said. "It is ironic that on the day the Delhi government announced the launching of 'Rozgaar Bazaar' for job seekers, employees of Delhi University were protesting against the non-disbursal of grant-in-aid," the DUTA said. For more than a year now, the Delhi government has been very irregular with the release of grants to these 12 colleges, it said, adding since these colleges are fully funded by the government, employees can be paid salaries only if grants-in-aid are released timely.

"However, not only has the Delhi government been irregular with release of grants, but the sporadic grants released have been found to be utterly inadequate. So much so that in some colleges, employees have been paid only part-salaries since April. "These grants are the only source of funding for these 12 colleges. Thus, not only salaries but even crucial bills like medical bills are not reimbursed till adequate funding arrives," the body said.

The DUTA had written to Chief Minister Arvind Kejriwal on July 21 informing him about the protest. The Delhi University and the city government have been locked in a tussle over the formation of governing bodies in the colleges with both accusing the other of delaying the process.