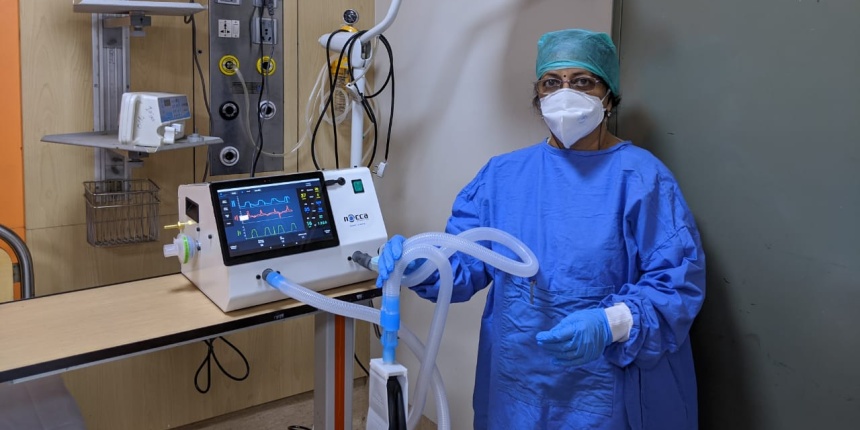 The first prototype for the ICU ventilator was built by four IIT Kanpur alumni holed up in a Pune flat. This is the final product (Image: SIIC, IIT Kanpur)
Team Careers360 | Apr 25, 2021 - 3:59 p.m. IST
Share Via

The Ventilator Project by Srikant Sastri and Amitabha Bandyopadhyay tells the story of how the IIT Kanpur Consortium built an ICU ventilator from scratch during the 2020 lockdown enforced to control the spread of COVID-19. Four alumni, holed up in a Pune flat in March 2020, built the first prototype drawing from their experience at IIT Kanpur’s Robotics Club, YouTube videos and with some parts from a local hobby store. They did it in just three days.

Then came the pitch for a ventilator by a robotics venture named Nocca Robotics. There was a simplicity and elegance to the proposal for building a high-quality life-saving device that immediately caught Amitabha’s [Professor Amitabha Bandyopadhay] attention. Until then, Nocca Robotics had been in the business of making robots to clean solar panels without using water.

Nocca Robotics was the brainchild of Nikhil Kurele and Harshit Rathore, both 2016 graduates of Indian Institute of Technology Kanpur (IIT-K). Nikhil had grown up in Shahdol, a small town in Madhya Pradesh, and was a ‘badmaash’ at school. Academics was not a priority for him. Although he fell in love with maths in class eight, he remained terrible at other subjects. In the class ten board exams, when he got 96% in maths but only 71% overall, Nikhil’s parents packed him off to Kota for his final two school years so he wouldn't be able to keep up his ‘errant’ ways. It was in Kota that he prepared for his IIT entrance exam.

Soon Nikhil was in IIT-K, where he developed an interest in robotics and became the secretary of the Robotics Club. A summer internship at the Frugal Innovation in Design and Technology Centre at IIT-K, followed by a second one as a design engineer at Tata Technologies, honed his interest in design. A ten-month stint at Bajaj Auto after graduating from IIT-K gave him the exposure to automation in assembly and machining processes. And with these pieces in place, the path to creating Nocca Robotics had been paved, especially once he met Harshit Rathore.

Although Harshit, a local from Kanpur, was a chemistry student at IIT-K, his heart was in motorsport. He was the technical lead for the Baja SAE All-Terrain Vehicle project on campus. A summer internship at Tata Motors and ten months in fabricated metal products manufacturing completed his transition from chemistry to robotics. Harshit and Nikhil shared a love for SAE motorsport and racing at 140-150 kmph on the JIT Kanpur airstrip was one of the ways in which they bonded. They would import components to build cars, using the money sent by their parents meant for tuition fees and wait for the club to reimburse it. Besides a love for motorsport, the duo also shares the same date of birth (though, as is common in India, Nikhil’s official date of birth is different).

But on 21 March, the call from Amitabha changed the startup’s course completely.

Nikhil had first responded to the call by offering to only assemble ventilators, then made a pitch to design a new one. By that time, India had recorded only 471 cases and 8 deaths, but the government had already begun preparing the country for social distancing by implementing a voluntary ‘janata curfew’ from 7 am to 9 pm on the previous day. By 24 March, Amitabha was convinced, along with the IIT-K Director Professor Abhay Karandikar, that the campus incubator would need to work with Nocca to build a new ventilator from scratch.

The very same day, Amitabha brainstormed with a small group of Mechanical Engineering professors (Sameer Khandekar, Arun Saha and J Ramkumar) and Dr Deepak Padmanabhan, a cardiologist from Bangalore who is one of the clinical mentors of the incubator. Various ventilator designs were deliberated upon including an Ambu-bag-based design. Ambu-bags are handheld devices used to help patients breathe especially in out-of-hospital situations. However, Dr Padmanabhan was very clear that only a full-fledged ICU ventilator would serve the purpose of saving Covid-19 patients. This was clearly a daunting challenge considering that Nikhil and Harshit had never seen a functioning ICU ventilator, let alone designed one.

However, they decided to take up the challenge.

There were many factors behind their decision, the first of which was of course, purely emotional - they wanted to serve the nation in its hour of crisis. IIT training develops in students not just the confidence to tackle any challenge but also an affinity towards being challenged. The crazier it is, the more they love it. There were two practical considerations as well. They realized that working on the ventilator project would allow them to operate their factory during the lockdown. And since such an important project was very likely to be generously funded, they would be able to hold onto their engineering team at Nocca Robotics. With this belief, they gave their hundred percent commitment to the project. 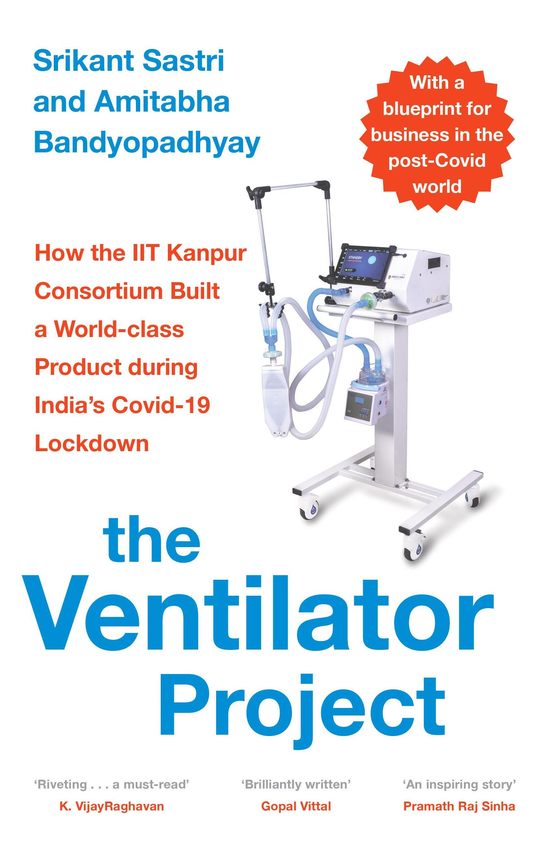 On 25 March, the director of IIT Kanpur, and a huge champion of the project, Professor Abhay Karandikar, posted on all his social media handles about this ambitious project. This gave the project much needed visibility, which brought in offers of collaboration and help kept pouring in. On 26 March, Amitabha received an email from Professor Ashutosh Sharma, Secretary at the Department of Science of Technology, Government of India, who is also an alumnus of IIT-K and a member of its faculty on lien to Government of India. Professor Sharma introduced Amitabha to a global team of volunteers - The Bridge Ventilator Consortium - who were helping teams from different countries to develop ventilators. One of the members of the team was Dr Govind Rajan, Clinical Professor, Department of Anesthesiology and Perioperative Care at the University of California in Irvine. Amitabha set up a meeting between the Nocca Robotics team and Dr Govind Rajan at 11 p.m. IST on 26 March 2020. Dr Rajan began by explaining how an Ambu-bag-based ventilator works and how to design it quickly. After he finished, the Nocca team politely informed him that their clinical mentor had urged them to only pursue an ICU ventilator and nothing else. Dr Rajan agreed with the advice given but was sceptical if this could be pulled off given all the constraints and the high-level precision needed. Like a magician pulling a rabbit out of a hat, Nikhil suddenly showed everyone a prototype of an ICU ventilator, and even Amitabha was stunned.

Nikhil and Harshit explained quite nonchalantly how they had got this done in the last three days by working almost non- stop. Two other IIT-K alumni were stuck in Nikhil and Harshit’s Pune apartment during the sudden lockdown in Maharashtra – their batchmate Abhishek Kulkarni and their junior Tushar Agarwal. Soon after the 24 March meeting with the director, the four of them had divided up work among themselves to read about different aspects of the ventilator.

Harshit and Tushar focused on the electronic circuits of an ICU ventilator and quickly created one mostly by using the parts used in their solar panel cleaning robots. Nikhil and Abhishek read up about the mechanical aspects and design to make the CAD (computer-aided design) model of their first prototype. They consulted several YouTube videos and learnt what mechanical components would be needed to create a ventilator prototype. With brilliant improvisation and a little luck on their side, they found a hobby store in Pune that stocked several robotics components. They began working on the prototype……

Amitabha walked away from the meeting confident that the Nocca team had passed its first big test. The next morning, he called Srikant and veteran serial entrepreneur Saurabh Srivastava to brief them about the meeting with Dr Rajan. His newfound confidence rubbed off on both of them; they all agreed that the IIT-K ventilator project should be a top priority, and that a task force should be created.

As the first step, a WhatsApp group was created on 27 March - ‘India Overcomes COVID’. The stage was now set. On this date, India’s Covid-19 toll had risen to 871 cases and 21 deaths.

Excerpted with permission from Pan Macmillan India from The Ventilator Project: How the IIT Kanpur Consortium Built a World-class Product during India’s Covid-19 Lockdown by Srikant Sastri and Amitabha Bandyopadhyay; Hardback Rs 599. 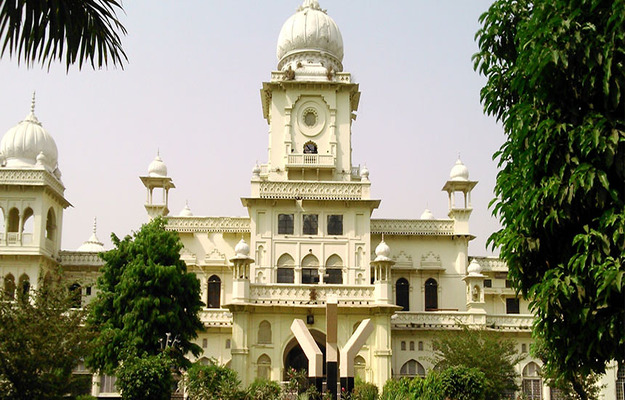