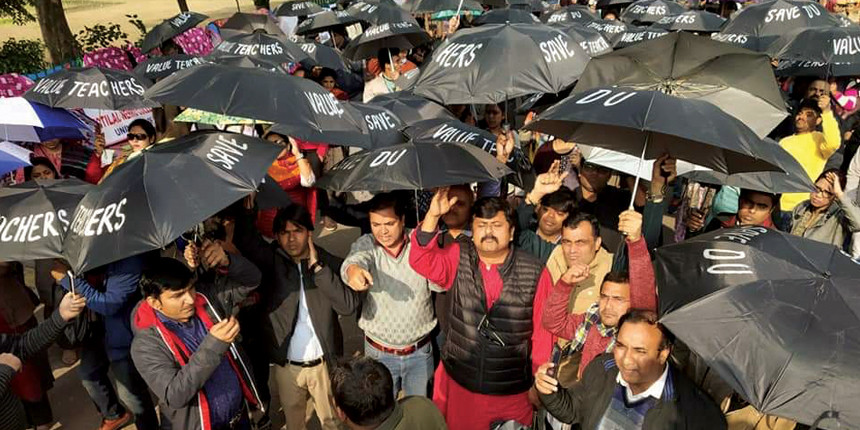 NEW DELHI: In 2013, Rakesh and his wife joined Delhi University as ad hoc teachers to gain experience before trying for a permanent post. Seven years later, they still continue to work on ad hoc basis. “We thought we would become permanent soon, but no interviews have been held for the last 10 to 12 years,” says Rakesh.

They are just two among thousands working in the university as ad hoc teachers and they have been a nearpermanent feature of Delhi University for more than a decade. And for the past three months, they have been on protest outside the Vice-Chancellor’s office, demanding “absorption” into the university system as permanent teachers.

Recruitment against permanent vacancies has been negligible during this period. In the last round of permanent appointments, made in 2015-16, just around 700 teachers were recruited against over 5,000 vacancies. On February 29, Amit Khare, Secretary, Ministry of Human Resource Development, speaking at a DU college, said he has had “detailed discussions” with the DU VC and asked him to take steps to fill up the vacancies at the earliest. However, he did not elaborate on these steps.

Delhi University has around 12,000 teaching posts of teachers in its various colleges and centres. The DUTA estimates there are around 5,000 ad hoc teachers in the university.

The service conditions vary for each of these categories of teachers. Permanent teachers enjoy full salaries and benefits. “The salary of an ad hoc teacher is the entry level payment of any permanent teacher without any perks or increment,” said Devesh Biswal, an ad hoc assistant professor at Satyavati College. They are also not entitled to dearness allowance (DA) or travel allowance (TA) either and their salaries remain the same for years.

The teachers lament that there is no scope for further studies either. While most ad hoc teachers are doctorates, there is no provision for study leave for post-doctoral studies.

“As an ad hoc teacher, we have only six to 12 casual and earned leaves combined in a year but this varies from college to college,” explained Biswal. “This is not enough, as we too have personal issues. Then, how can we accommodate our study hours? So, we miss out on many things and can’t even enhance our skills.” Women teachers get no maternity leave.

Then, there is the further indignity of a quarterly performance appraisal. Teachers in ad hoc positions put in extra hours, take up more responsibilities because every four months, they have to obtain a certificate of ‘satisfactory performance’ to be able to continue their service after the mandatory break. “We need to keep the kitchen fire burning,” Biswal quips.

Presently, the salary of ad hoc teachers remains fixed at Rs. 89,000 per month, irrespective of the number of years they’ve been teaching.

Guest teachers are worse off. Qualified enough to teach college students, they are paid by the hour and can deliver a maximum of 25 lectures per month. Each lecture lasts an hour and the fixed pay is Rs. 1,000 per lecture. So, a guest teacher can at the most make Rs. 25,000 a month.

The university has recently started appointing guest teachers for a semester. A university notification on August 18, 2019 called for filling up permanent teaching positions with guest teachers and also made ad hoc teachers eligible to apply for that.

“This is which is not acceptable to us because again there is no job permanency,” said Rajesh Jha, member of DU’s Executive Council. “This is a way to kill public-funded universities and make them private.”

The guidelines for guest teachers have also been revised. A guest teacher can now give up to 32 lectures in place of 25. The per-hour pay has now been raised to Rs. 1,500 and they are now appointed for a semester. “But in summer and winter vacations they cannot have lectures,” said Biswal. For those months, they go without pay.

Members of the DUTA argue that the recruitment process for guest faculty is against the university guidelines since sanctioned posts are not being filled. “Around 60 percent teachers are working on ad hoc basis, how is it possible?” asked Jha.

Ad hoc teachers have been protesting outside the VC’s office for three months now. “He isn’t even talking to us,” said Jha of the VC Yogesh Tyagi.

On December 5, 2019, a section of teachers had met the secretary, higher education at Ministry of Human Resource Development. There was no progress on the demand for absorption but the ministry had assured them that teachers working on ad hoc basis will be shortlisted for interview. The teachers are still waiting for that to happen.

Not satisfied with the “half-baked” assurance, as Jha put it, DUTA continues its protest. It has also asked teachers not to participate in invigilation of exams, evaluation of answer papers and any other official duty.

Academics believe that the consequences of large-scale ad hoc appointments are grave and will be felt by the future generations. There are dozens of ad hoc teachers even in DU’s departments. “Basically, both students and teachers are losing,” said Amitava Chakraborty of the Department of Modern Indian Languages. “At one end, teachers do not grow either professionally and at the other, students are losing because there aren’t enough supervisors for MPhil or PhD. Ad hoc teachers in the departments cannot guide research.”

Naveen Gaur from Dayal Singh College says that the problem has worsened in the past decade. “Recruitment is not happening because clearly the system is not there,” he said. “There is no intention of the government or the universities to do any recruitment. This is a cost-cutting measure.” In the process, many good teachers have abandoned the profession altogether, he added. This, in turn, has affected quality of students. “The number of applicants hasn’t dropped but many drop out mid-way when they see classes not being held,” he said. Students who can afford them are opting for private universities.