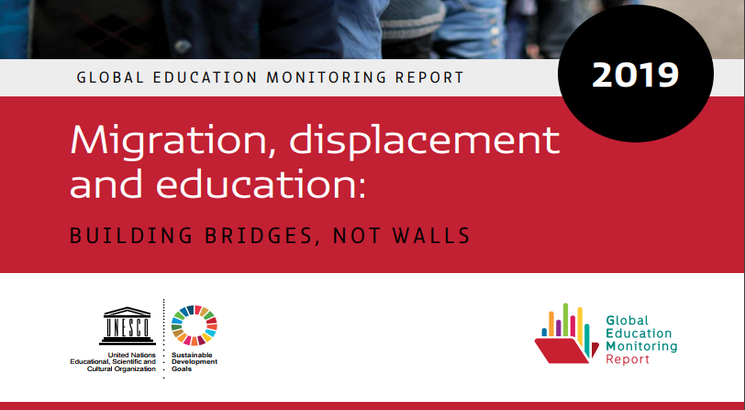 NEW DELHI, NOVEMBER 23: UNESCO launched the 2019 Global Education Monitoring Report (GEM Report) on migration and the social policies pertaining to education and assimilation in countries worldwide. Titled ‘Migration, displacement & education: Building Bridges, Not Walls’, the report highlights that India has made progress in providing education for migrants, but notes that serious challenges remain.

The GEM report discusses India’s initiatives on a national and local level aimed at educating the children of seasonal workers and combatting the negative effects of seasonal migration on education. It warns that children left behind by migrating parents and seasonal migrants face fewer educational opportunities overall, and projects the growth of children living in slums by 2030 as a result of migration to cities.

The report states that in the period between 2001 and 2011, inter-state migration rates doubled in India. Further, an estimated 9 million people migrated between states annually from 2011 to 2016. But many people are also moving for seasonal work. In 2013, 10.7 million children aged between 6 and 14 lived in rural households with a family member who was a seasonal worker. This is particularly common within the construction industry: a survey of 3000 brick kiln workers in Punjab found that 60% of kiln workers were inter-state migrants.

The GEM Report shows 80% of migrant children across seven Indian cities did not have access to education near worksites. Among youth aged 15 to 19 who have grown up in a rural household with a seasonal migrant, 28% were identified as illiterate or had an incomplete primary education. The report shows that up to 40% of children from seasonal migrant households are likely to end up in work, rather than school, facing exploitation and abuse.

The Report also warns of the negative impact on education for children who are left behind as their parents migrate. Test scores were lower among left-behind children aged 5-8.

Yet the report acknowledges the initiatives that India has taken to respond to the migrants’ education needs. The Right to Education Act in 2009 made it mandatory for local authorities to admit migrant children. National-level guidelines were issued, allowing for the flexible admission of children, providing transport and volunteers to support with mobile education, create seasonal hostels and aiming to improve coordination between sending and receiving districts and states.

Gujarat introduced seasonal boarding schools to provide migrant children with education and collaborated with non-government organizations (NGOs) to begin online tracking of the children on the move. In Maharashtra, village authorities called upon local volunteers to provide after-school psychosocial support to children who had been left behind by seasonal migrating parents. Tamil Nadu provides textbooks in other languages to migrant children. Odisha assumed the responsibility of seasonal hostels run by NGOs and works with Andhra Pradesh to improve migrant well-being.

The Report notes that most interventions are focused on keeping children in home communities instead of actively addressing the challenges faced by those who are already on the move. Furthermore, not all initiatives are having success. A pilot programme used on brick kiln sites from 2010-2011 in Rajasthan to track the progress of out of school children did not improve learning in any substantial way. Teachers on the sites cited culture, language, lifestyle, cleanliness and clothing as major barriers between them and the kiln labour community. Teacher and student absenteeism were rampant due to the poor teaching and learning conditions and the need for students to work at the kilns.

Another major education challenge presented by large-scale internal migration is the growth of slums and informal settlements, where schools are often scarce. Globally, the Report estimates that there will be an additional 80 million children living in slums by 2030. In Mumbai, between 100 and 300 families were arriving looking for work every day.

Manos Antoninis, Director of the GEM Report, said: “As the number of people living in and around cities continues to grow, we need to respond to the education needs of those in slums. Without the data, governments will be able to continue ignoring the problem”.

Slum dwellers’ education needs are often severely impacted by eviction and resettlement. 18% of the students displaced by a riverfront project in Ahmedabad dropped out and an additional 11% had lower attendance. The 2016 India Habitat III national report committed the government to universal provision of basic services including education. Yet, research from the same year showed that urban planners were not being trained to understand the particular needs of slum dwellers.

The Report shows there is only 1 urban planner for every 100,000 people in India, while there are 38 for every 100,000 in the United Kingdom. Registration and documentation requirements for migrants set up to reduce migratory flows make it harder to enter schools as well. Eligibility for benefits, including for education, under the Mumbai Slum Areas Act, required proof of residence, which many did not have.