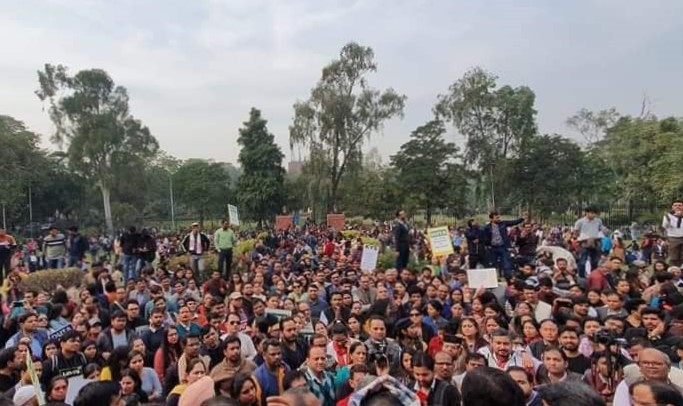 NEW DELHI: After hundreds of teachers entered and surrounded the Delhi University Vice Chancellor’s office on Wednesday, the university administration had a six-hour meeting with the leaders of the university’s teachers’ association at night.

However, the meeting solved nothing and the protest continues. Teachers returned to the Viceregal Lodge, the office of the VC, to continue their protest on Thursday morning.

Thousands of DU teachers launched an indefinite strike on Wednesday, boycotting exam and evaluation duty, after a section of college principals decided to put on hold the appointment of ad hoc teachers last week.

In a statement issued early morning on Thursday, the Delhi University’s registrar said that the VC, Yogesh Tyagi and his team, including the Pro-Vice Chancellor, registrar and dean (admissions), met the office bearers of DUTA “in the intervening night of December 4, 2019 and December 5, 2019 and had a long discussion spanning over a period of six hours on various issues raised by the…DUTA.”

The statement contains an appeal to “maintain peace, not to be carried away by rumours and not to allow any disruption of examinations and other academic activities” but does not say whether any concrete decisions were taken. According to teachers, both the impasse and their protest continues.

The DU administration also wrote a far less conciliatory note to the DUTA president, Rajib Ray, on December 5. The letter from the proctor, Neeti Sehgal sayd Ray and his colleagues "forcibly trespassed into the Viceregal Lodge by breaking the main gate and various doors of the heritage building". It further says that Ray and supporters are "still continuing to illegally occupy the premises" and directs them to "vacate the unlawful siege of the building immediately and leave place peacefully".

Protesting teacher and elected member of DU’s highest decision-making body, the Executive Council, Rajesh K Jha countered alleging: “The term of the proctor has expired. Her appointment is in violation of the concerned statutes. The VC is making the appointments of his team members violating the rules and regulations. So, her letter has no legal sanctity.”

It had no effect either because teacher entered the Viceregal Lodge again on Thursday. 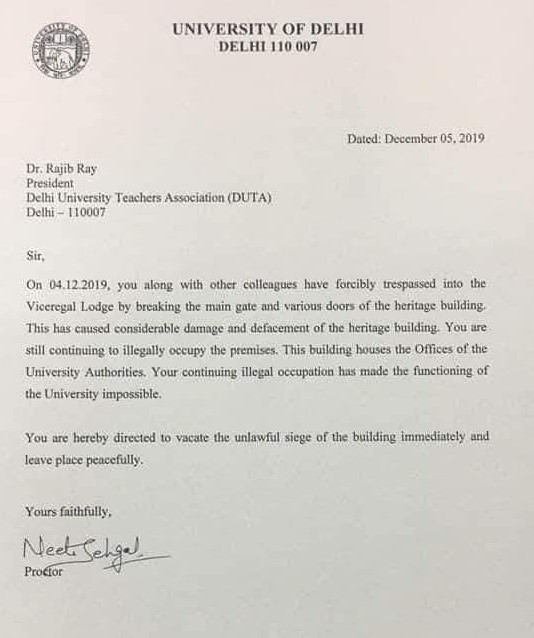 With over 5,000 teaching posts going vacant, Delhi University colleges have long relied on ad hoc teachers, now numbering around 4,500, to keep academic activities, including examinations and evaluation, running smoothly. Appointment for several months at a time and reappointed after the gap of a day, ad hoc teachers are paid at the same level as assistant professors but without any other benefits. Hundreds of DU’s ad hoc teachers have been teaching for years.

The principals’ decision was based on an August circular instructing colleges to appoint guest teachers for “new vacancies arising first time in academic session 2019-20”. Paid by the lecture, guest teachers are significantly more vulnerable and also less accountable than ad hoc teachers, argued some. 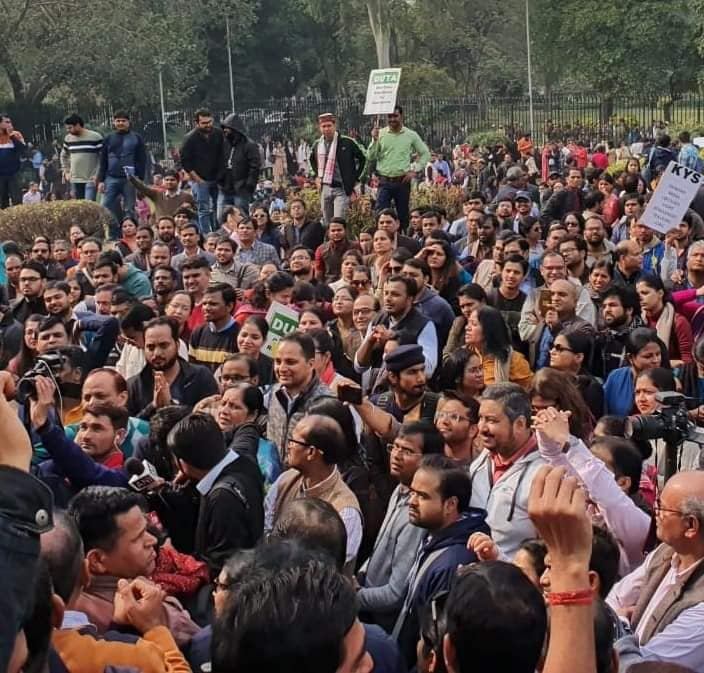 The DU statement further says: “The university has “already started [the] recruitment process to recruit faculty members on permanent basis as per UGC [University Grants Commission] Regulations, 2018, and is committed to complete the process at the earliest.”

However, this process will be more complex than the statement suggests.

The DUTA has pointed out that holding permanent recruitment now could potentially shove out of the university the thousands of ad hoc teachers who have helped shore up DU’s systems and processes for years. Therefore, the association demands that the ad hoc teachers currently serving be absorbed as permanent ones before further recruitment take place. They demand a “one-time regulation” from the University Grants Commission and the Ministry of Human Resource Development (MHRD) to enable this. However, there has been no word on this from either the UGC or the MHRD.

The process of recruitment has been complicated also by the introduction of the 10 percent EWS reservation for the upper-caste poor, or economically weaker section, in admissions and recruitment earlier this year. The reservation rosters that decide which posts will be reserved and for which category have to be redrawn and it, too, can displace ad hoc teachers.

“It was conveyed to the office bearers of DUTA that the university administration is open to discuss any relevant issue in an atmosphere of mutual trust and respect,” DU’s statement further said. “An appeal was made to the teachers to withdraw the agitation to facilitate amicable dialogue.”

Correction: An earlier version of the story said the strike began on Thursday. It has been now corrected to say it began on Wednesday.