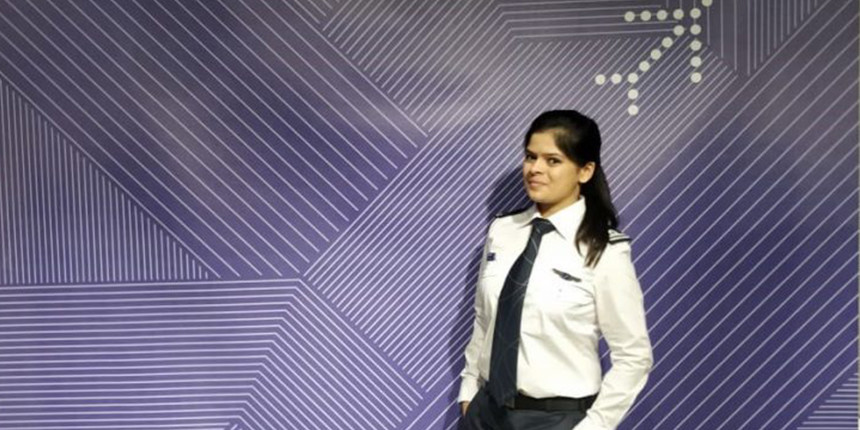 NEW DELHI: An alumna of UPES, B.Tech. Aerospace (Avionics) class of 2011-2015, Surabhi Sharma has made not only her family, but also her University proud of her achievement. She has become the first commercial pilot from her hometown, Sambhar Lake in Rajasthan.

Even before pursuing her engineering career, Sharma aspired to become a pilot someday. In pursuit of her dreams and to gather a better comprehension of the working of aircraft, she enrolled in UPES under the Department of Aerospace. So, when did she first decide that she wanted to fly aircraft?

“When I was in Class VIII, I remember watching Air Crash Investigation with my father on television. It may sound childish, but that is exactly when I decided I had to fly aircraft. Nothing else fascinated me as much as being in the air having control of the aircraft,” Sharma said.

Currently based in Bengaluru, Sharma has to her credit a Commercial Pilot license from National Flying Training Institute Gondia under the aegis of Indigo Cadet Program. She has been working as First Officer at Interglobe Aviation Limited (Indigo) since January 2018.

Sharma enrolled for the undergraduate programme under the Department of Aerospace in the year 2011. “It was a part of my plan,” she explains, “to pursue this degree at UPES. It gave me an insight into the machine I was going to operate. My understanding of the aircraft improved, and it also helped me pass the necessary examination with ease.” She wrote the entrance examination in her final year at UPES, and with appropriate guidance and mentoring from the teachers at UPES, she cracked it in the very first attempt.

Sharma is the first woman commercial pilot from Sambhar Lake in Rajasthan, her hometown. Till now she has flown over 1700 hours, including domestic and international flights.

Education across levels is the best form of empowerment that can be extended to women to positively impact the state of their being, their status and position in the society and build a solid foundation for their holistic growth and development. With an aim to create an ecosystem that empowers women and equips them with knowledge, skills and self-confidence, UPES had declared the year 2020 as the Year of Women’s Empowerment and launched Shakti.

Despite constituting 48 per cent of India’s population, women are underrepresented in institutions of higher learning, particularly in STEM courses. Lack of financial resources is one of the major reasons that prevents girl students from pursuing quality higher education and fulfilling their dreams. To equip girls with quality education and training to boost their participation across levels, UPES has, among other key initiatives, also announced an unconditional 25% scholarship on tuition fees of complete program duration to all female students applying for all under-graduate and postgraduate courses starting with the session of 2020.

UPES School of Law raises the bar in legal education

Your UPES Dehradun brochure has been successfully mailed to your registered email id “”.