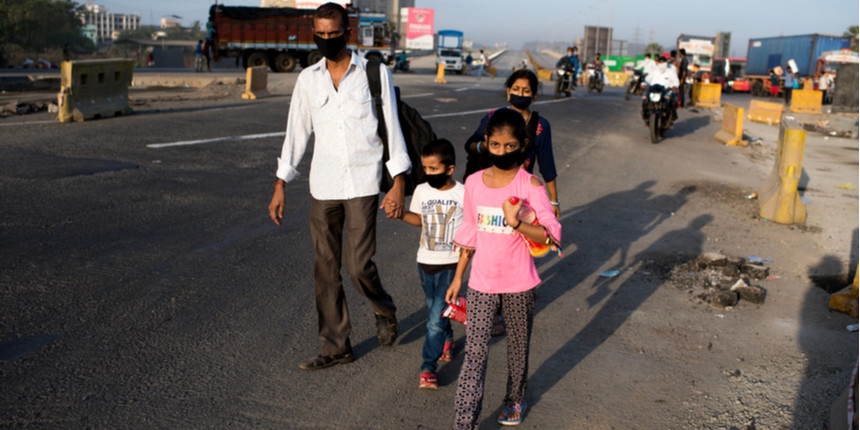 NEW DELHI: Children in about 62 percent households discontinued their education amid the coronavirus outbreak, according to a rapid needs assessment that surveyed 7,235 families across 15 states. The rapid needs assessment was carried out by child rights NGO Save The Children to understand challenges, thematic priorities and impact of coronavirus among target beneficiaries.

The assessment found that the discontinuation of children's education was reported by three-fifths (62 percent) of the surveyed households with the highest number was recorded in north India at 64 per cent and the least in south India at 48 per cent.

"In terms of settlement, out of total 40 per cent of urban and 38 per cent of rural children were not receiving MDM," it found.

The assessment also found that 40 per cent people were not able to provide adequate meals and eight out of 10 households reported a loss of income. Anindit Roy Chowdhury, director of programmes and policy impact, Save the Children (India), said what the report highlights is that a large proportion of children are not receiving any kind of support in terms of education.

No support for education

It further said "42 per cent of rural and 40 per cent of urban households had not received any kind of education support". In addition, the assessment said that 14 per cent households did not have smartphone or required internet bandwidth connection to attend online sessions.

It also found that four out of ten children were reportedly 'playing at home with learning' and one out of four children were 'working at home' due to the closure of schools. Acute shortage of cash and lack of livelihood opportunities were among the most crucial challenges identified by the assessment. Lack of livelihood opportunities was reported by nearly three-fourths (74 percent) of the households while the acute shortage of cash was reported by 80 per cent households.

"Across hubs, 27 percent of North (highest), 17 per cent of West and 7 per cent each for East & South (least) households reported not to have received ration under PDS," it said.

Chowdhury said once migrant workers return home from other states they may have a house there but they do not have a livelihood. "It means there are more mouths to feed in limited income that has put a tremendous burden on the overall rural part of the country.

It was seen that food scarcity was obvious at urban level but now we are seeing that at the rural level also livelihood has taken a big hit and this has repercussions," he said. "One livelihood impact that we are very worried about is we will see exponential growth in terms of child labour.

We are certain about it. We will see trafficking growing for child labour, domestic servitude and commercial sexual exploitation.

Another thing which will have a longer-term impact is child marriage which will be on an all-time high," he said.

However, Chowdhury said, "it is too little a data to predict a particular trend". The rapid needs assessments are generally undertaken immediately after a disaster to provide information on needs, possible courses of action and resource requirements.