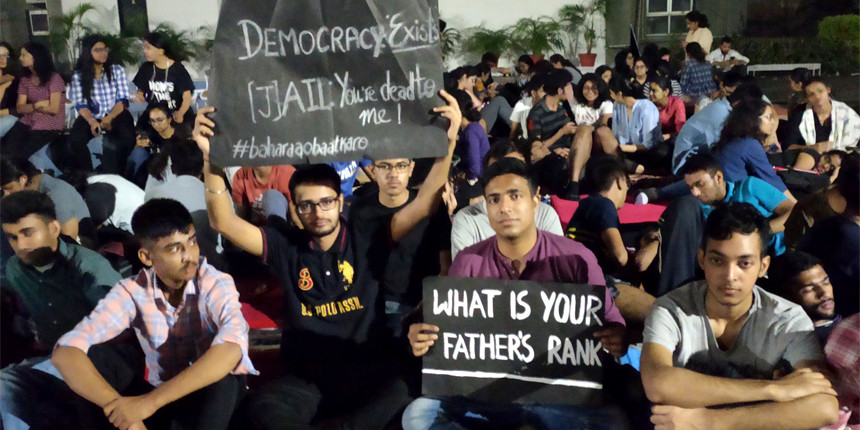 NEW DELHI: Hundreds of students at the Army Institute of Law in Mohali, Punjab, have been on protest since October 15.

A statement issued by the students on October 16 says the institute is "plagued by administrative inefficiencies, deteriorating quality of the teaching staff and a general sense of unreasonableness and apathy toward the students". The law school is run by the Army Welfare and Education Society and at present, its undergraduate roll-strength is of 400 students.

Their sit-in began on the night of October 15 and was still on at the time of publishing. A meeting with the management committee on Thursday afternoon failed, a member of the negotiating group for students told Careers360.

The main point of contention is the institute’s code of conduct. Students find it "draconian, infringes upon the basic freedoms of students, and leaves enough scope for administrative ambiguity and discretion". The statement also wryly observes that students are "referred to as inmates".

The students point out that they "lack...a democratically elected student representative body" to take up issues on their behalf with the administration. What they have instead are student representatives nominated by the authorities and their role is generally limited to activities like "conducting the daily roll calls in the hostels" and ensuring students attends lectures in the right attire.

This situation does not allow for the effective mitigation of problems faced by students of which, there are several. They are not allowed to go about the campus after 11 pm "despite having a curfew of 9 pm" (the time by which they are expected to report back to campus) and "more than adequate security personnel". Students are not allowed to order food late at night - a sore point also because the mess and cafe are allegedly "appalling" with "rampant frolicking around of rodents", "silky tresses...swimming in bowls of soup" and "service providers taking on the role of rajahs".

The statement further alleges that "students are "not allowed" to fall sick at night because it's inconvenient for wardens" and that women students face moral policing and questions about their character and upbringing.

In addition to these problems, students also complained of poor placements and faculty and "arbitrary disciplinary actions against students".

The code "prohibits collective airing of grievances" but encourages the aggrieved to approach the authorities individually. "The authorities then proceed to conduct a character assassination of the student and damage his/her credibility instead of providing constructive solutions," alleges the statements.

The students first submitted a joint petition to the institute's principal, Tejinder Kaur, registrar Col. Harbinder Singh and other "named dignitaries" of the Western Command and the Army Welfare and Education Society.

The students’ statement further alleges that there is no "organised disciplinary body" and one is constituted each time an offence takes place and "in an arbitrary manner". There is no student representation on these bodies. The institute allegedly also lacks an internal complaints committee and has "no mechanism to redress grievances regarding sexual harassment". Institutions are legally mandated to have ICCs.

Upon receiving no response, students began their protest on October 15. A social media page titled, "Protests at Army Institute of Law" has listed a set of demands: an elected student body, justification of fee hikes, repeal of “arbitrary provisions” in the code of conduct, institution of a system of factoring students’ feedback on teachers, redress of complaints against the mess and cafeteria services, inquiry in the conduct of the women’s hostel warden, a clearly-defined board of inquiry that also has student representation and lifting the restriction on students movement on campus after 11 pm for both men and women.

The students have faced some pushback from the institute’s administration as well. On October 16, the same day the students issued the statement, it wrote to the guardians of some students summoning them to the campus to "discuss the conduct" of their ward with the management at 10 am October 19.

Guardians have been alerted that their "ward...has been found participating in the agitation against the institute" since the night of October 15. "This act has led to a protest by other students in the campus during the day and continuing which is against the ethos and laid down norms of the institute," says the email. "Such act of an individual not only cause[s] disruption in academic routine but also ha[s] adverse impact on the reputation of the premier institute which is run under the Army management." Kaur did not respond to either call or text message from Careers360. However, she told Hindustan Times that she “invited the students for a meeting to resolve the issues but they didn’t listen”.

However, the students have been supported by the institute’s alumni as well as student associations of the Rajiv Gandhi National University of Law, Patiala, Punjab and the Hidayatullah National Law University in Raipur, Chhattisgarh – both have seen similar student agitations in the recent past. Sections of students from Delhi University have also extended support.