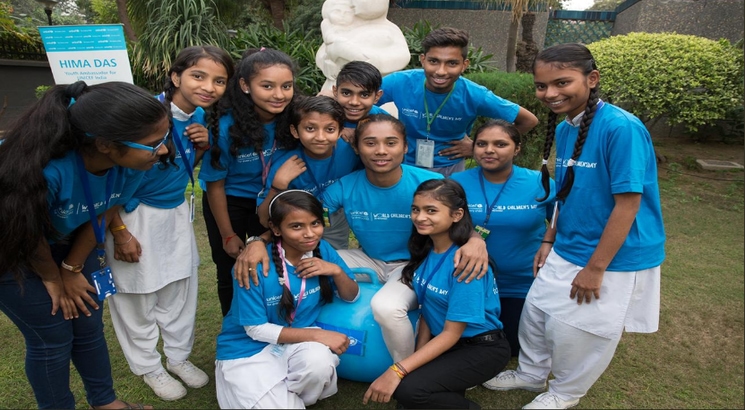 Hima’s onboarding as a youth ambassador is the part of Go-Blue series of initiatives and events undertaken by UNICEF to advocate for a safe and supportive environment in schools, in the lead up to World Children’s Day on 20 November. This World Children’s Day, UNICEF Youth Ambassadors will be appointed across the globe to inspire young people to become agents of change.

An 18-year-old girl from the Dhing village in Assam, Hima has emerged as an international award-winning sprint runner. She recently won a silver and a gold medal at Asian Games 2018 held in Jakarta. Expressing her happiness, Hima said, “My role model is Sachin Tendulkar and I am very happy to follow into his footsteps and become a UNICEF ambassador like him.”

“It is an extremely proud moment for me. As an athlete, I get to meet a lot of young people and as UNICEF’s Youth Ambassador I will be able to amplify their voices and issues,” Hima said. “I want for every child, regardless of their background, gender or ability, to be able to access schools that are safe and supportive so that they can learn and thrive.”

Giving a message for the country’s youth, Hima said in a press interaction, “If you want to do something and make it big, do it with all your heart. It won’t be achieved merely by sitting at home. You have to get out and take the first step yourself.”

Laura Siegrist Fouché- representing UNICEF India, said, “Hima is a young athlete and she can inspire millions of young people to realize their dreams and aspirations. By appointing her as our first ever Youth Ambassador, we aim to leverage her potential in galvanizing children and adolescents to bring about positive change in the country."