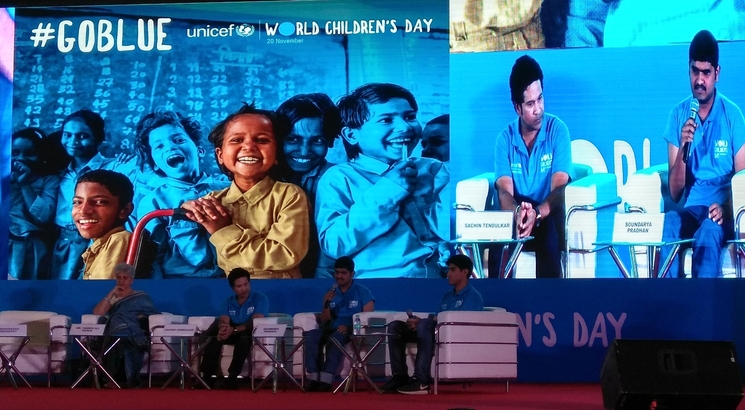 NEW DELHI, NOVEMBER 20: Vouching for being fearless but not careless, cricket legend and batsman of international fame, Sachin Ramesh Tendulkar, interacted with children and played football with them on the World Children’s Day in the capacity of United Nations Children's Fund-India (UNICEF India) Goodwill Ambassador.

UNICEF India brought together sports community to celebrate World Children’s Day (WCD) and raise awareness around child rights in India. Sachin played a unified football match with children from Special Olympics Bharat with crowd encouraged to go blue. #GoBlue is a UNICEF’s campaign asking supporters to rise in solidarity of children rights by turning the world blue- by doing or wearing something blue at school, on the streets, on social media or on the sports field. As a mark of support, iconic landmarks of India such as Rashtrapati Bhawan, UN house in Delhi, Chhatrapati Shivaji Maharaj Terminus in Mumbai and Bhopal and many educational institutions lit up in blue or associated with blue colour in other manners.

Sachin also participated in a panel discussion with Soundarya Pradhan, India’s first ever silver medal winner at the World Junior Chess Championship for Blind, Air Marshal Denzil Keelor, Founder Trustee of Special Olympics Bharat and Dr Yasmin Ali Haque, UNICEF India Representative. Welcoming the gathering, Dr Haque highlighted that intention of the Go Blue campaign is to draw attention of the world and children themselves on child rights and to facilitate them become their own advocates. “It is a day for children, by the children,” she said.

Stressing on the role of sports as an empowerment tool, Sachin said, “Sports has the strength to bring everyone together. It doesn’t recognize the colour of your skin, doesn’t know your bank balance and doesn’t discriminate and that is the best thing to teach children.” “When sports in any form and education work together in harmony, the results follow and good individuals are given to the world."

Outlining his story, young Soundarya said, “Chess helped me to come to the mainstream and break traditional mental barriers of society towards people like me who are 100% blind. It helped me improve my communication skills and confidence.” Speaking to disadvantaged and vulnerable sections of the society, Soundarya said, “Before asking the world to come in support of us, we have to first face the challenges ourselves.” Speaking in a similar tone, Air Marshal Keelor emphasized that most people don’t realize they are capable of good things because whole their lives they focus on disabilities rather than their abilities.

Giving his final message to children, Sachin said, “Be nice and humble and don’t be afraid to do anything you want. Niceness and humility do not mean that you are weak, rather they are your strengths.” He advanced for three major causes for children- equal opportunities for all, encouraging children to go healthy by choosing sports and focussing on hygiene and sanitation in schools.

As a part of the day, UNICEF also announced its newest Goodwill Ambassador, the Emmy-nominated actress, Millie Bobby Brown. With this, the 14-year-old Millie becomes UNICEF's youngest-ever Goodwill Ambassador. The day culminated in India with a series of Go-Blue initiatives which began earlier on November 14, with 18-year-old, Assamese sprint sensation of India, Hima Das appointed as the first ever youth ambassador of UNICEF India, with an aim to inspire and gather support towards the cause of children and youth.