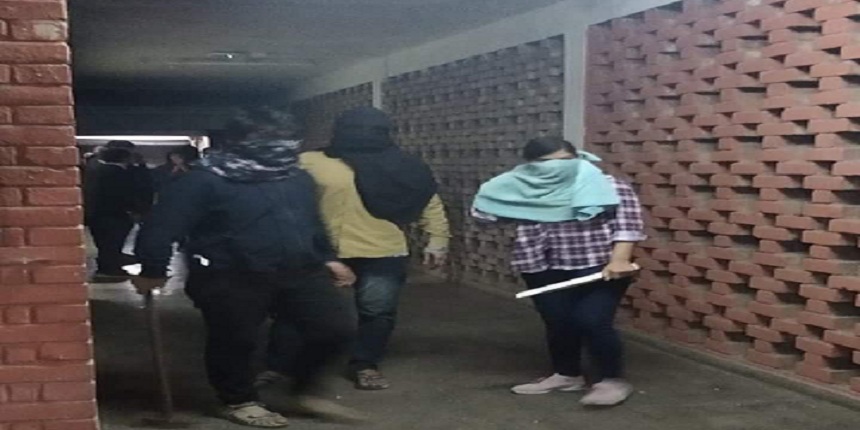 At a press conference, the students police named included All India Students’ Association activists Dolan Samanta, Chunchun and Sucheta Talukdar and the JNU Students’ Union president, Aishe Ghosh. She had received a gash on her forehead in Sunday’s violence. From the Akhil Bharatiya Vidyarthi Parishad – the BJP-linked group students have accused of orchestrating the violence – the police identified just two, Vikas Patel and Shaurya. However, they released the wrong photograph for Patel, pointed out students.

This is Vikas Patel Delhi Police! The photo you matched with Vikas patel is Shiv poojan modanwal! Enough of your lies. Your are trying to protect and save terrorists who attacked JNU by sharing incorrect information and naming victims as accused! #DelhiPoliceLies pic.twitter.com/a6pxgJmPm8

“Delhi Police can do their inquiry. I also have evidence to show how I was attacked,” said Ghosh told Asian News International. She continued: “I have full faith in the law & order of this country that investigation will be fair. I will get justice. But why is Delhi Police biased? My complaint has not been filed as an FIR. I have not carried out any assault.”

The teachers’ Association expressed its “disappointment” with the police’s announcement as well. They said in a statement that the January 5 incidents have been “almost glossed over as a non-event”. The statement further says: “It may be noted that till date not even one of the several complaints filed by teachers has been turned into a FIR”. The teachers have now demanded an “independent investigation” into the matter that can also “scrutinise the acts of commission and omission on the part of the police as well as the JNU administration”.

Meanwhile, the television channel India Today conducted a sting operation on the JNU violence and had a student from ABVP "confessing" he was involved and led others on camera.

Following this the Ministry of Human Resource Development issued a statement saying JNU students will not have to pay the utility or service charges and that higher education regulator and funding agency, the University Grants Commission has been directed to bear the cost. The JNU Vice-Chancellor, M Jagadesh Kumar informed the students the decision taken on December 11, 2019 in MHRD “were being implemented in totality”.

Speaking to ANI, Kumar said “We also want that the report of the investigation comes and if culprits are recognised then we hope that they will be punished”.