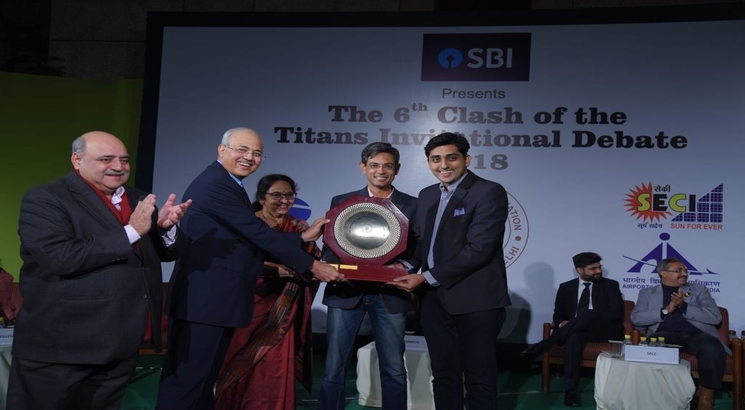 NEW DELHI, NOVEMBER 18: Alumni from five University of Delhi colleges of national fame explored, prodded and engaged in the war of words on the subject of 'Freedom of Speech' at the sixth edition of ‘Clash of the Titans Invitational Debate,' organized by the Old Students’ Association (OSA) of Hindu College at India Habitat Centre in New Delhi.

Alumni from Hindu College, Miranda House, Lady Shri Ram College (LSR), Sri Ram College of Commerce (SRCC) and Indraprastha College (IP), from different walks of life, participated in the debate competition. The topic of the debate was ‘Freedom of Speech is a Luxury India cannot afford.' Radha Kumar from Miranda House was one of the two speakers to win 'Best Speaker' award and spoke against the motion. She highlighted that freedom of speech is not a luxury but a necessity and essentiality for India. However, she emphasized that no liberty is absolute and having the freedom to speak your mind doesn’t mean closing the doors to the freedom of dissent. Other distinguished orators also crossed their swords on this topic of contemporary relevance.

Speaking on the occasion, Ravi Burman, President of OSA, Hindu College said, “The Titans Cup debate is growing in influence each year and this year again women speakers out-numbered the men and had a larger number of youthful debaters being showcased. The Debate serves as a unique platform to bring together alumni from different colleges and providing bonding & networking opportunities. We look forward to similar engagements each year. We are grateful to all the college authorities and the alumni for making this event a success.”