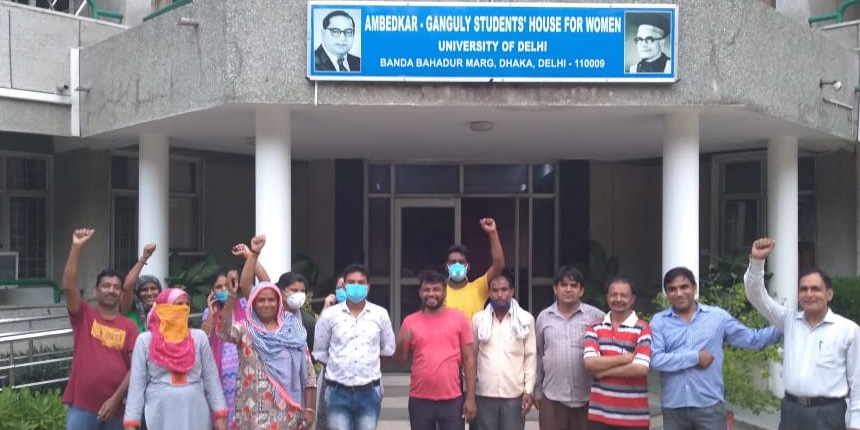 NEW DELHI: Festival celebrations for Reena Lohat, 42, a housekeeper in Delhi University’s Ambekar Ganguly Students’ House for Women turned bitter when she was handed an eviction notice on Rakhi day.

Lohat, along with 15 other contractual workers of the hostel, were served job termination letters on August 3. Ironically, their job contract had been renewed in July. All 16 workers, including drivers, cooks, cleaners or safai karamcharis, and guards, have been asked to vacate the workers’ quarters by September 2.

“I was so devastated and heartbroken when the hostel authorities told us we are being terminated,” said Lohat. “ I have served this hostel for 17 years. Never in my worst dream did I think that I’ll have to see such a day,” she lamented.

Due to “acute financial crisis” during the ongoing pandemic, the hostel management of AGSHW decided to shut down the hostel. Students residing in the hostel were asked to leave their rooms in March during the lockdown period. 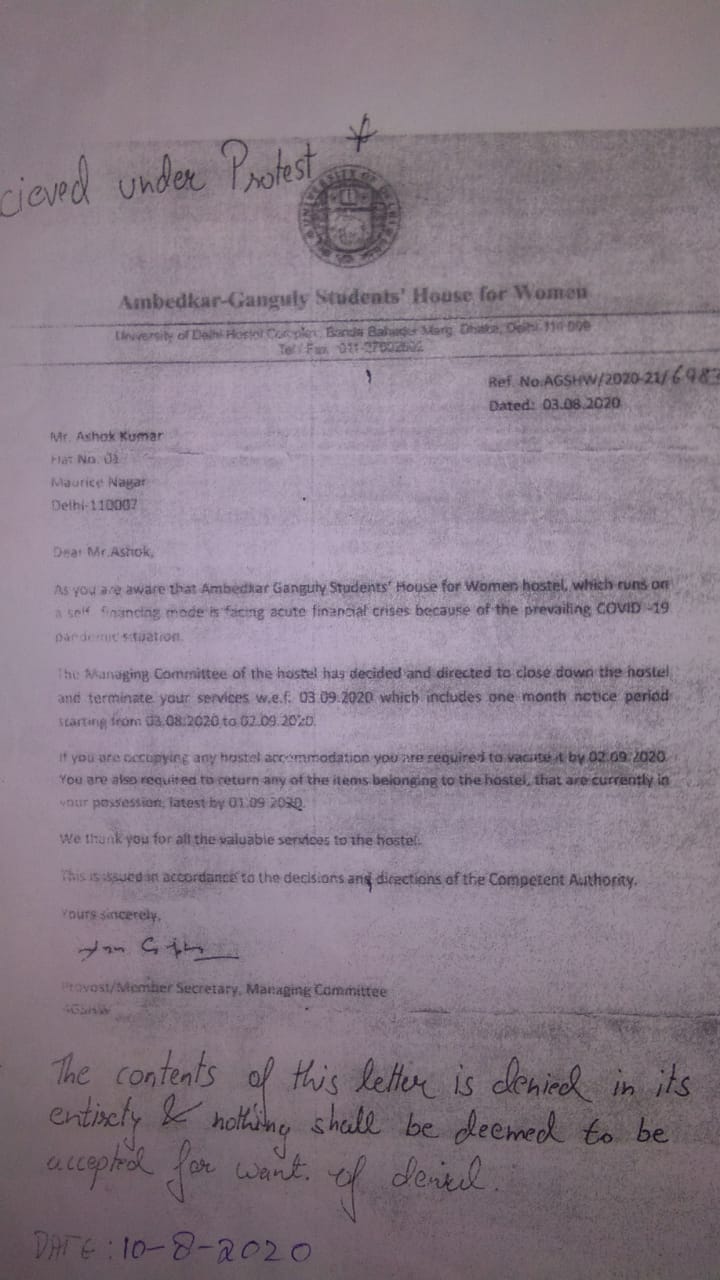 The workers have rejected the eviction notice

The decision to close down the hostel has taken away the livelihood of workers, most of whom are sole breadwinners of their families. “My colleagues do not have anywhere else to go. Most of us are the only earning members of the family,” Lohat said. “A colleague’s husband has drinking problems. How will she run her house with no money during this tough time?" she asked.

The hostel, which housed 99 postgraduate students, is run in self-financing mode. As the hostel lies vacant, the students who have returned to their homes have not paid the hostel fee. The salaries of these 16 workers came from the fees collected from the student residents.

“There are a few students who are stuck in Delhi and wish to return to the hostel but they are not being allowed to come back,” said student and hostel resident, asking not to be named. “This is an arbitrary decision and the workers should not bear the brunt of the hostel’s financial problems,” she added.

Out of the total 19 contractual workers of the hostel, 17 are directly employed by the hostel management committee and the other two receive their salary from the university. One member of the cleaning staff was allowed to keep her job because she was pregnant. The contract of each contractual worker is renewed every six months.

The workers have been working in alternative shifts throughout the lockdown period. Rejecting the termination letter, the workers have alleged that the committee has taken a hasty decision.

“We want the committee to reconsider their decision because even our prime minister has said that workers should not be evicted during the coronavirus pandemic,” Lohat said. “For now we have decided to send a letter to the university asking them to revoke this order. If they do not help us then we will have no option but to move the Delhi High Court,” Lohat said.

Despite repeated attempts, the chairperson and the provost of the hostel could not be contacted. If they respond, their comments will be added to the copy.