Education is not to be sold for personal gains 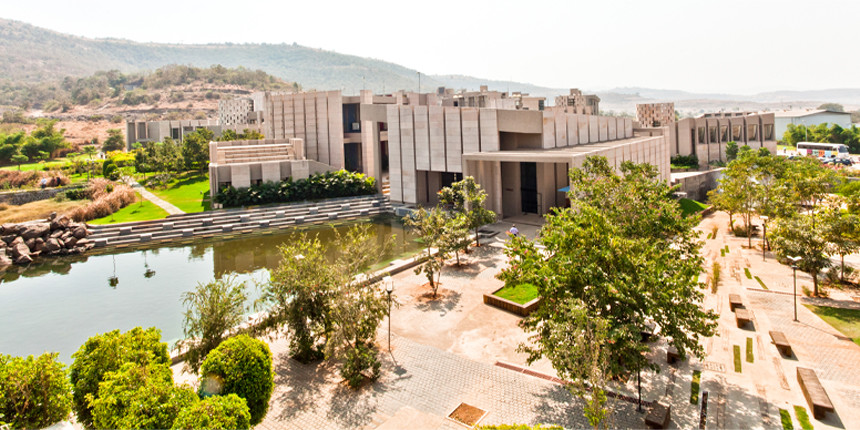 An ambitious philanthropic initiative of teaching investment and management as part of liberal arts education succeeds in a big way at FLAME University...

While it is hard to imagine philanthropy in a sector that has excessive government control, it is more difficult to imagine contributions towards creating a liberal arts institution. Flame University, nestled in the beautiful valleys of Sahyadris in its lush green 85-acres campus, is the stuff that dreams are made of. It takes a lot of courage of conviction for any philanthropist in India to envision a university, build it to perfection and draw comfort from the impact it creates. But when you set foot in the offices of the founders, much of your misgivings are laid to rest.

Nemish Shah is no ordinary man. He is devout, believes in karma, reticent, shy, but one of the most accomplished wizards of mint street. When you go about researching on him, all you can find are thousands of mentions of his successes, but nothing that he himself has spoken about. There are no published interviews. There aren’t any images too.

The Enam group that Shah founded has the ability to move the stock markets. Shah stayed away from stocks like liquor, cigarettes etc. All one can decipher about him is from the stocks he invested in. He looks at the managements, the ethics of business, credible promoters and people who understand the power of compounding. It wasn’t always about the numbers. People and actions behind those numbers mattered to him. Nothing else was available for public consumption. This possibly is the only interaction he provided to a journalist. Only because, it concerned education and FLAME University, a work of belief and passion for him.

His belief systems are firm, though he refuses to be judgmental about others. He believes that education should not be sold for personal gains. “In Jainism, we believe in Abhay Daan, Aushad Daan, Aahaar Daan and Gyan Daan (security, food, health and knowledge) and never sell it for personal gains,” he says nonchalantly. “How can you gain out of the needs of others?” he asks.

When asked what ignited that spark that made him set up FLAME University, and that too focused on liberal arts and management, he says “FLAME is more destiny than design. Best form of giving back is ‘gyan daan’. The idea germinated with a simple thought of providing a truly international education at a cost that most Indians can afford. It has to have the right blend of our culture while making societal impact too”. He is quick to correct me when I say ‘investments in education’. He believes that one can only make ‘contributions or grants’ for an educational initiative and ROI can never be a consideration. True to his belief, Nemish Shah and other co-founders have ensured that the university remains debt free by contributing for the entire Capital Expenditure by way of philanthropy. Shah believes that universities cannot and should not be servicing debts as the burden ultimately is borne by the students.

Why a liberal arts and management university?

Ask Shah why a university focused on liberal arts and management? Shah is quick to respond. A huge fan of the thoughts and wisdom propounded by Charlie Munger, Vice-Chairman of Berkshire Hathaway, Shah believes that understanding beyond numbers and objective data are more important, especially in the current times.

Shah believes that connecting dots and critical thinking are more important. He thinks managing, creating and investing are more an art than a science. Successful people will have understanding and exposure to other disciplines like psychology, history, economics, sociology also. He believes that “interdisciplinary will be at the core of everything we do”. “We are creating leaders and change agents, not just managers. Some of the most revered world leaders come from liberal education backgrounds,” he says.

It is from this perspective that FLAME University also collaborated with ‘The Library of Mistakes’, a charitable venture located in Edinburgh, United Kingdom, founded to promote the study of financial history. ‘The Library of Mistakes’ exists to allow students, professionals and members of the general public to study financial history to understand how finance has worked, rather than how it should work if key unrealistic assumptions are made.

Letting the results do the talking

Shah is also wary of making promises that he can’t fulfil. He ensures that FLAME is always under the radar, not talking too much about itself and letting the results do the talking. Needless to say, FLAME University is the youngest university to be accredited by the National Board of Accreditation (NBA). It boasts of some of the best foreign collaborations, including those with Wellesley College, Amherst College, Nuffield College University of Oxford, Babson Collaborative, Indiana University Bloomington. “We are elated that they have put faith in us and believed in our vision,” he says, adding, “We prefer to be the Rahul Dravid amongst universities.” Unassuming and understated, Shah lets his convictions talk through his actions.

The team that built FLAME

Shah credits Parag Shah (founding chairman), Vallabh Bhansali (co-founder) and Anil Singhvi for much of the success in execution. The idea to getting the first leadership team led by Indira Parikh was a masterstroke. “She along with Parag understood liberal education very well,” he says. “And they invested themselves and created the DNA of the institution.” He treats every leadership at the university like a family - Indira Parikh, Devi Singh and Dishan Kamdar. “Every time, I went to meet him, he would receive me and drop me back till the elevator,” says Dr. Devi Singh, FLAME’s former Vice-Chancellor (VC). This sort of respect given to academics attracts the best talent, he says. “I am humbled by my experience at FLAME University. I understood the value of education only after working in this philanthropic initiative. We have a faculty and a class even if just five students chose an elective,” says Prof. Dishan Kamdar, the VC. Almost every faculty at the university had good things to say about the management in general and the founders in particular.

As a family and a group, Enam continues to be in other philanthropic initiatives as well, however, through education. “You can cultivate your mind, body and soul and everyone was highly energized by the idea of creating a liberal arts university. FLAME is created keeping in mind the concept of mind, body and soul,” says Shah.

He acknowledges the pain and effort needed to create a green field education initiative. “The effort was twofold - creating something from scratch has a lot of challenges…location, infra, etc. but the bigger challenge is building the soft infrastructure, which is building a team with a complete buy-in to the vision of what we wanted to create. We have been lucky enough to be able to attract and retain some of the best brains in the industry,” he says with a glint of satisfaction.

Unlike many entrepreneurs who dabbled in education and made a mockery of academics, Shah has a sharp eye on getting the right talent. “A university is not a piece of real estate but is made by a faculty that could shape young minds. Good faculty would come only with greater autonomy, strong peer group and an environment that encourages thought leadership,” he says. It seems to be paying off as the university receives some top-class applications for its faculty openings. “Because of the management and the philanthropic initiative, we have managed to attract the best faculty. For a university so young, we get the PhDs from very established universities wanting to work with us,” says Dr. Kamdar.

Why in Pune?
Location often plays a very important role in the success of such an initiative. On selection of Pune as the location compared to Mumbai, Shah says “Pune is the Oxford of the East. It has a good confluence of industry and academia. It’s blessed with a serene environment of learning. It’s also very close to Mumbai. Most importantly, it is a cultural hub too. It ticked all boxes that we wanted to.”

FLAME University has ensured that it draws and gains a lot from the expertise of its founders. The FLAME Investment Lab is one such initiative where the best and the biggest financial giants of India talk to the students and teach them to look at companies beyond the numbers in the balance sheets and help interested students understand value investing. “FLAME Investment Lab is very unique in India. We teach investment as part of liberal arts. We tend to believe in the Graham and Dodd school, the Warren Buffet school of value-based investing,” says Manish Chokhani, member of the governing body at FLAME University.

FLAME University also boasts of collaborative spaces. These are open spaces created to enable students and faculty, cutting across disciplines and hierarchies to interact, engage and collaborate on projects, assignments etc. These are meant to spark the imagination of students by cutting through disciplines and bringing in a fresh perspective.

Shah gets emotional when talking about the happiness derived from the initiative. He attends every convocation and stays back to talk to parents and students. “Parents meet me at times with tears in their eyes and tell me how education at FLAME transformed their children. Students discover what they are truly passionate about. Parents are so happy to see their child grow to be a young adult. It works like magic and re-energizes me. All the pain and effort seem worth it when I meet happy and proud parents. What I see in their eyes is what makes it worthwhile.”

On what he considers as his mission accomplished, Shah is modest. Our objective is to prepare students for life and not just for the first job after FLAME. We should Provide skillsets that last beyond the first job, Skills that a liberal education inculcates and those that help navigate challenges of the future.”

The interaction with Shah lays to rest any misgiving on philanthropy. Philanthropy survives because people like Shah exist. Such interactions give a fresh lease of life to faith in humanity and the future of India.