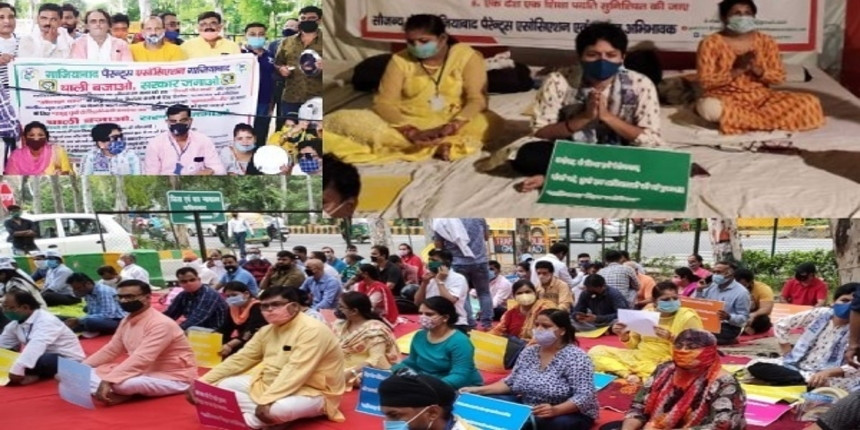 GHAZIABAD: On the eighth day of their hunger strike against private schools here, protesting parents were vacated by the police and taken to a hospital to get their COVID-19 tests done, officials said on Wednesday.

On Tuesday, Ghaziabad Parents' Association president Seema Tyagi was admitted to a hospital after her health deteriorated on the seventh day of the agitation inside the district headquarters premises.

Parents are up in arms against the schools over the issue of the fee for the coronavirus lockdown period from April to June.

The action was initiated on the instructions of the district administration. For the last one week, several people had joined the protest which was a violation of COVID-19 lockdown and prohibitory orders under section 144 of CrPC, city superintendent of police Abhishek Verma told PTI, adding that the deteriorating health condition of protesters was another reason behind them being taken away.

However, the district president of Congress Bijendra Yadav said the forced termination of the hunger strike by the administration was done after instructions from the BJP ruled state government terming it as a dictatorship.

Almost all the schools are being run by BJP leaders or their relatives that is why the government is not paying heed towards the demands of the parents.

The public had elected BJP leaders and now they will teach them a lesson in the elections, Yadav said. On Monday,

Congress general secretary Priyanka Gandhi Vadra had lent support to the parents and demanded the state government's intervention in their interest.

The Congress leader in a Facebook post said the condition of several protesting women was critical. Gandhi said people of all sections are facing financial issue so the government should intervene and take a decision in the interest of parents and schoolchildren.

She demanded that the government order private schools not to drop schoolchildren of they fail to pay their fee for the next three months.