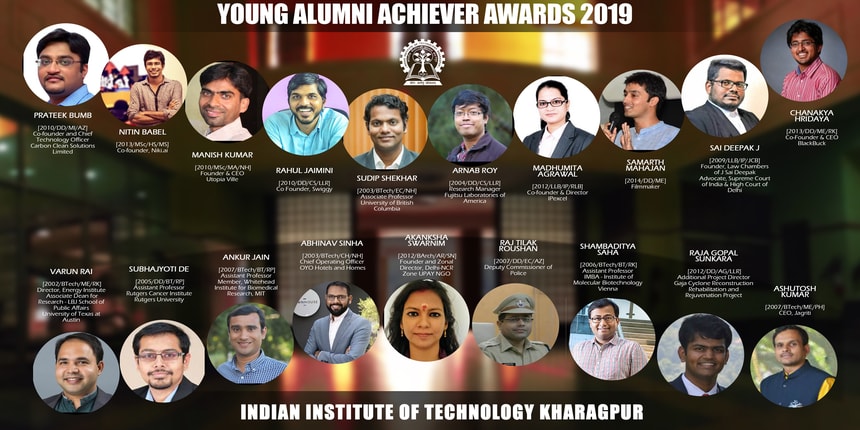 NEW DELHI, AUGUST 14: IIT Kharagpur will be honouring 19 young achievers with the Young Alumni Achiever’s Award (YAAA) for 2019 on its Foundation Day on 18th August.

The achievers not only includes pioneering researchers, indefatigable bureaucrats, police officers, change-makers, lawyers, film-makers, but also new-age entrepreneurs, some of whom are household names today.

Among them are Abhinav Sinha, Chief Operating Officer, OYO Hotels and Homes, Chanakya Hridaya, Co-Founder & COO of BlackBuck, a company that is revolutionizing logistics in India, Nitin Babel, Co-founder at Niki.ai, a leading artificial intelligence company in India which is backed by Ratan Tata, and Rahul Jaimini, who is the Co-founder of Bengaluru-based Swiggy, the immensely popular food aggregator.

There are also dynamic bureaucrats such as Raja Gopal Sunkara, IAS, Additional Project Director, Gaja Cyclone Reconstruction, Rehabilitation and Rejuvenation Project, who led a rescue campaign during Kerala floods last year, or Raj Tilak Roushan, IPS, Deputy Commissioner of Police, Nagpur city, who have thought out of the box and managed to profoundly impact the way civic and police administration functions. Roushan, for example, was selected for Union Home Minister’s Medal for Excellence in Investigation for 2018, one of the two from the entire country for developing protocols which led to the rescue of 450 minors and 100 trafficking victims in a year.

Prof. Sriman Kumar Bhattacharyya, Director, IIT Kharagpur, said to the awardees of 2019, “We are proud of your achievements, your courage to lead from the front, your unflagging zeal to take on new challenges and make a difference. May this award inspire you to greater heights in life.”

The YAA award will also go to Akanksha Swarnim, founder of Delhi-NCR chapter of UPAY, an NGO providing free education to the street and slum children, Manish Kumar, Founder and CEO of Utopia Village Pvt Ltd, which is working with more than 2,000 tribal farmers in remote villages of Odisha, Ashutosh Kumar, whose ‘Jagriti Yatra’ is a first-of-its-kind entrepreneurship train journey program that has gained global footprints and been replicated in other countries, and Samarth Mahajan, whose debut feature documentary, The Unreserved, has won national acclaim and has premiered at Film Southasia 2017 and more than 50 national and international fora.

Among the other recipients, this year are young scientists such as Dr Varun Rai, Director of the Energy Institute in the University of Austin, Texas, Dr Subhajyoti De of the Rutgers Cancer Institute, Dr Ankur Jain of MIT and Dr Shambaditya Saha of the Institute of Molecular Biotechnology, Vienna. Each of them has, through the scientific breakthroughs achieved by them, extended the frontiers of modern science and medicine.

The Young Alumni Achiever’s Awards are conferred on under-40 alumni of the Institute whose professional contributions are recognized widely or on those who have a demonstrated commitment to excellence.

Prof. Subrata Chattopadhyay, Dean, Alumni Affairs, said, “From the major cities of the world to the interiors of the country, from science to social welfare and aesthetics, a younger generation of IIT KGP alumni are leaving their imprint in diverse sectors. Although there are 19 recipients this year, the YAA awards manage to honour only a few of them”.