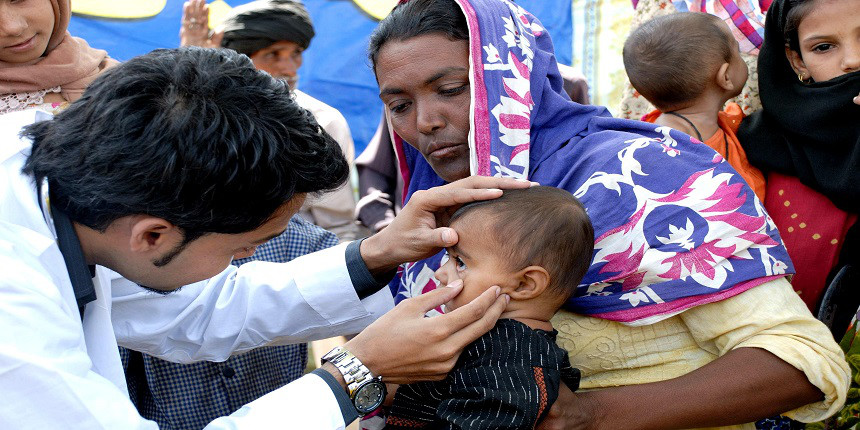 NEW DELHI, APRIL 22: Ahead of Niti Aayog meeting in the national capital to allow a ‘Bridge Course’ between BDS and MBBS, allowing dentists to practice family medicine, the Indian Medical Association (IMA) has come out strongly against the proposal terming it a ‘myth’. It as also claimed that there is no shortage of doctors in the country and it is the government which do not have the capacity to absorb all the MBBS graduates, leaving them unemployed.

Niti Ayog is likely to hold the meeting with representatives of the Dental Council of India, senior officials of the Ministry of Health and Family Welfare (MoHFW) and other senior doctors to discuss the modalities of a three-year bridge course. The IMA has termed the idea of the course as ‘Bridge to Nowhere’, it says, “Mid-level providers are a myth. Every Government falling for this myth only exposes the shallow thought process and utter disregard for human life.”

The Government aims to improve the doctor-patient ratio and increase access to health care for the rural population by taking service of these mid-level health providers in various health centres across the state, especially in areas where there is an acute shortage of MBBS doctors.

Dr. Santanu Sen, National President, IMA has claimed that there is no shortage of doctors in the country. He said, “63,250 MBBS graduates come out of 494 medical colleges of India. India has only 23,729 postgraduate seats. The fact remains that the Government do not have the capacity to absorb the rest of them. Every year the unemployment amongst young medical graduates is a cause for great concern.”

The proposal is based on the fact that the MBBS and dental courses in the country follow the same training and curriculum for the first three years. 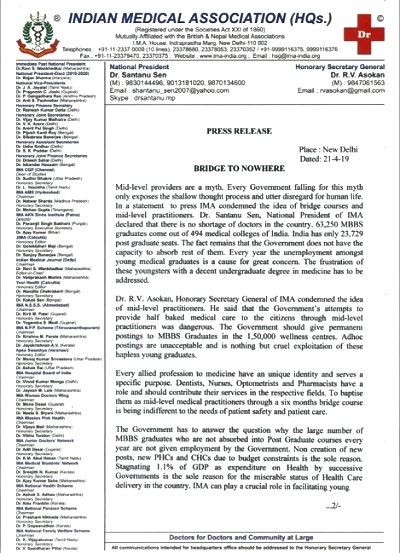 Dr. R.V. Asokan, Honorary Secretary General, IMA condemning the idea of mid-level practitioners said that the Government's attempts to provide half baked medical care to the citizens through mid-level Practitioners is dangerous. “The Government should give permanent postings to MBBS Graduates in the 1,50,000 wellness centres. Ad-hoc postings are unacceptable and is nothing but a cruel exploitation of these hapless young graduates,” Dr Asokan said. On the other hand, a section of doctors are in favour of introducing a bridge course, they are of the view that the IMA is similar to American Medical Association (AMA), it wants to keep supply low and demand high so the price for services stay high. Around the world, nurses, midwives, dentist, even village doctors in China become RMP with bridge courses. According to them, MLHC has played an important role in providing affordable health care in Africa, Thailand, Bangladesh, US, UK.IMA has threatened to go on a nationwide strike if the proposal gets through. It is to be seen will IMA pressure work on the Government in the peak election time or decision will be deferred for some time.