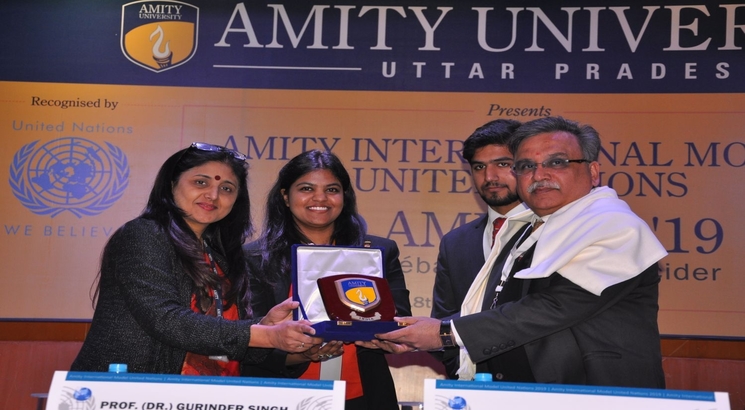 Dr. Sanjay K. Dewan, Honorary Consulate General of Cape Verde said, “The changing global dynamics such as nuclear proliferation, decline in global economy, rise in populism and inequality, modernization of technology has made it imperative for governments to build stronger bi-lateral and multilateral relations for corporation.” He further added, “Debates and discussions are indispensable in International relations as they help build new relations, mend broken ones and prevent wars” referring to US and North Korea bi-lateral meetings as one of the best examples.

The delegates attending the three day conference pointed out that on many occasions, discussions and deliberations have resolved conflicts and led to socio-economic betterment of people.

Speaking on the occasion, Dr. Yasmin Ali Haque, UNICEF Representation to India commended the student delegates for participating in Model United Nations to address the global issues and find shared solutions to common problems through constructive debate and exchange of ideas.

She addressed the participants as the representatives of ‘Generation In-charge for agenda 2030’- the innovators, young leaders, academic minds and vanguards of sustainable future. She commented that the global challenges of present times are larger and more interconnected than ever before.

Dume Munni Irone, Founder of Art4Peace averred hat in order to have peace, there is a need to create more jobs. She suggested that educational institution must instill wisdom and sensitivity towards global issues amongst students from kindergarten itself. Munni advised the students to manifest on what they want to be and encouraged them to work with dedication to achieve the goal.