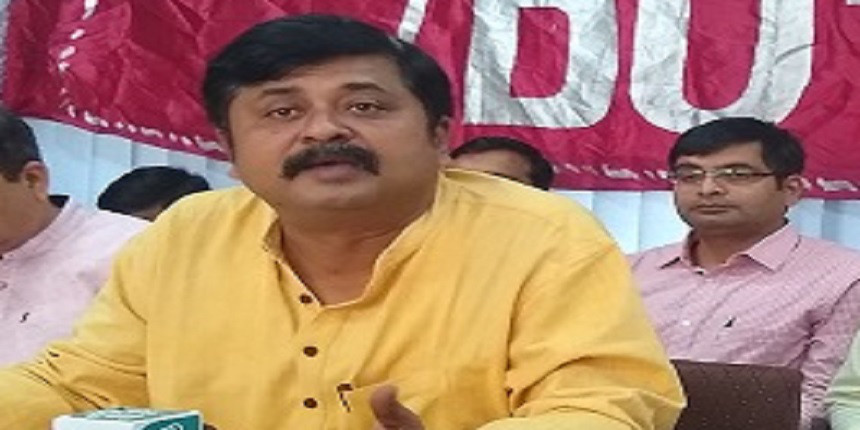 NEW DELHI: The Delhi University Teachers’ Association has called for a “shut down” of the university on October 25, as teachers protest outside the meeting of its highest statutory body, the Executive Council. On the agenda for the EC meeting is DU’s “Institute of Eminence” status. The university was selected for this special status in September, 2019 but is yet to sign the agreement.

The teachers, however, are vehemently opposed to it, arguing that it will place the public university under tremendous financial strain and lead to fee increases for students. Tied up in this protest is also the association’s critique of the Draft New Education Policy’s (NEP) recommendations for restructuring higher education and an August letter saying guest teachers must be appointed against vacant teaching posts.

Rajib Ray, DUTA president, spoke to Careers360 on why Delhi University teachers are dead set against reforms that other universities have appeared to embrace.

Q. DUTA organised outreach programme against NEP to mobilise students, what are the problems in the NEP?

A. The NEP is going to be tabled in the Winter Session of the Parliament and the most important issue it has is that it visualises a three-tier structure of the university. It also suggests that all governing bodies be replaced by a Board of Governors, inputs from outside and role and inputs of the industry will be incorporated.

The NEP also suggests that individual institutions grant degrees. With this, the Delhi University tag will go and the tag of individual colleges will remain. It is something like an autonomous structure which is being visualised, which has already failed in Delhi University. If these are implemented, the brand name of Delhi University will go.

Most people come from different parts of the country not just to study in Delhi but for Delhi University and the 30-40 best constituent colleges that it has, which is not available in any other metro.

Q. The association is also opposed to the “Institute of Eminence” status given to DU, it has been alleging that DU's acceptance of the IoE status will cause an increase in fees and other costs. Could you elaborate on that?

A. There is larger issue in that. We are opposed to it as the government is trying to privatise DU by giving it the IoE status. As per the proposal, there will be no permanent department. We are not opposed to it if the existing structure and character of the university remain intact. We know that the Government will give Rs. 1,000 Crore but for the additional funding, the university will have to manage it on its own. How will that be done? One way would be to increase the fee.

The DUTA has unanimously rejected it on the ground that it involves a push towards privatisation. The former HRD Minister, Prakash Javadekar, while announcing the Graded Autonomy [scheme] for universities and the grant of IoE status, had confessed that these steps constitute the initiation of liberalisation in the education sector. A reading of the documents concerning IoE substantiates that deregulation of these institutions is accompanied by provisions which make them dependent on the market to finance the activities they are tasked with.

Up to 25 percent of faculty are required to be foreign faculty and among the rest would be persons drawn from industry, for whom UGC qualifications would not apply, who would charge much higher salary.

The variable pay provision for domestic teachers will strengthen a particularly obnoxious trend.

Burdened with the task of raising huge sums as revenue, the variable pay provision is bound to incentivise those capable of and willing to devote themselves to commerce-friendly activities.

The inevitable huge increase in expenditure which the Government is not promising to fund will increase fees astronomically. Increase in fees will not be enough unless the university’s engagements get reoriented towards revenue-generating ones meeting immediate market demands at the expense of core and fundamental engagements which may not have immediate market demand.

The IoE scheme also offers some avenues for raising revenue. Thirty percent of students can be foreign students and the administration will have full freedom to determine the fees they have to pay. In order to attract foreign students willing to pay astronomical fees, courses and amenities have to be redesigned.

It also gives the university the freedom to determine fees for domestic students, subject to one meaningless rider. The rider is a principle that no one will be turned away for his/her incapacity to pay. In the absence of any guideline on how high the fees can go and the criteria for availing that fee waiver or scholarship, loans will become the only mechanism. These will bind up the students’ future.

The list of benefits also includes benefits which used to be the prerogative of every university that was unwisely snatched away by the Government when it imposed the Choice Based Credit System. The freedom to design courses and course content ought to be with the universities anyway, it was snatched away from all and is being given to some provided they accept self-financing!

Q. How do you think this will impact the student community?

A. They will be hugely impacted, just look at the Indian Institutes of Technology (IITs), how B.Tech fee has been increased in the past four-five years. We have all seen how the fee for the M.Tech courses has been increased. For many people, Rs 25,000 is nothing but there are students who can’t manage even this much easily.

The University without consulting the Academic Council, Executive Council took this gamble of Rs. 1 Crore (application fee for IoE) and applied for IoE status. Now that they have got it, they have to sign a certain memorandum, for which they need to follow certain other things that have not been followed till now.

The documents have not been made public, if our statutory members want DUTA to take a position against this, we will take that position.

Q. Do you mean to say that DU administration did not consult or secure the approval of any statutory body of the University while applying for IoE status?

A. No statutory body was consulted for this. Now that we have started raising an issue they have started to release some documents. We are not opposed to reform, but it has to be done in a proper manner, at times the administration does not realise what they have to do and what not, they just follow what their bosses have told them to do.

Q. Has DUTA approached the Visitor or the Government to apprise them of the ongoing situation at DU?

A. We have written to the Visitor, there is also a white-paper on mis-governance of the DU Vice-Chancellor, we have requested in the letter to Visitor that he should be asked to leave the university.

Q. Why has the DUTA called for the shutdown of the university on October 25? What are you demands?

A. After a detailed discussion on the MoU being signed by the University to get their IoE status, the DUTA Executive took a decision to call for a total shutdown of the University on Friday, October 25, 2019, and a dharna [or, sit-in] from 1 pm to 3 pm outside the Executive Council meeting to protest against this move. We also demand the withdrawal of the August 28, 2019 letter asking for guest appointments to be made against all new vacancies.

Over 4500 teachers are working on adhoc -temporary basis and the DUTA is demanding one-time Regulation for the absorption of these teachers.

The DUTA plans to step up its response to this perverse attack on public-funded higher education by building up a formidable platform of joint struggle in which all stakeholders, including students, fight to defend the federal structure of the university, permanent jobs and democratic participation in decision-making.