NIRF Ranking is to improve quality and encourage competition: Javadekar 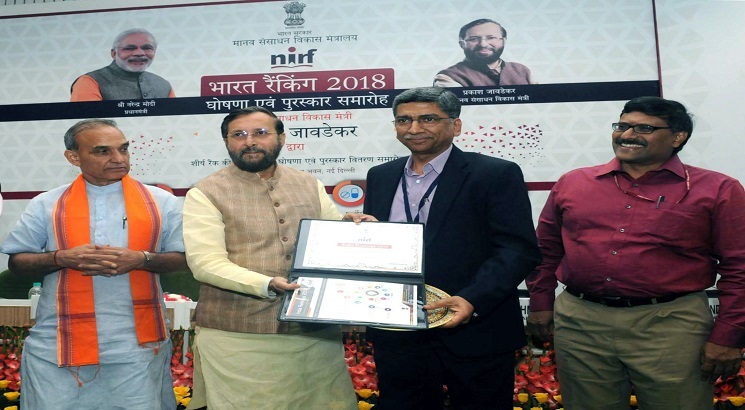 NEW DELHI, APRIL 4: The Union Minister of Human Resource Development, Prakash Javadekar has said that the idea behind Ranking of Universities is to improve the quality of education and encourage competition among higher education institutions to perform better.

“India Rankings 2018” have ranked institutions in the disciplines/categories mentioned above, and have also provided a common overall rank across all disciplines for those institutions which have more than 1000 enrolled students.

Speaking on the occasion, Javadekar said that the idea behind these rankings is to promote quality in education and encourage competition to perform better and to set up new benchmarks of performance in Higher education space.

He lauded the efforts of the team under National Institutional Ranking framework (NIRF) for bringing out the most authentic ranking system of the country. The Minister also congratulated all the winner institutions for their excellent performance.

This year also saw the beginning of limited ranking of institutions in new areas like Medicine, Law and Architecture.

Although the Central Government funded institutions, in general, continue to do well, some of the state-funded and private universities also appear prominently. Some private institutions and universities have consistently occupied good positions, and some have been rising in their ranks, thus indicating that they offer value for money to their students. Maintenance of consistent or improved positions over previous years clearly indicates that it has not been a one-time random event. This should augur well for Higher Education.

The ranking of General Degree Colleges which was started last year, saw a much more enthusiastic participation this year, with 1087 colleges in the fray. This represents an increase of almost 100% over last year. The ranking list throws interesting light on their geographical spread. Almost all renowned institutions are represented in this year’s ranking. Similarly, participation for a place in the overall rank increased nearly 25% over the last year.

The Minister said that to promote quality education, we are providing support for setting up and upgrading of 10 public and 10 private Institutions of Eminence (IOEs) so as to enable them to reach amongst top 100 of world institutions ranking. The list of 20 IOEs will be released soon. He further said that various initiatives of the HRD Ministry like GIAN, RUSA, SWAYAM, SWAYAM Prabha, TEQUIP III, Smart India Hackathon, etc are in the direction to further boost the Quality, Research, and Innovation in education.

While addressing on the occasion, Dr. Satya Pal said that to become the global leader in education we have to create our own brands so that other countries may follow us. He said that healthy competition gives us a chance to improve and opportunity to excel in various aspects of life. He further said our main focus should be on the quality of research which can contribute to the development of the society as a whole. He stressed upon a mechanism which can develop a holistic campus in the country.

Secretary, Ministry of HRD said that the NIRF rankings are the cornerstone of various higher education reform measures taken up by the HRD Ministry over the last four years. New categories i.e. law, architecture and medical have also been added in this year’s rankings, Subrahmanyam disclosed.

The parameters used for India Rankings 2018 are broadly similar to those used in previous years. However, some of the sub-parameters have been further tweaked for greater robustness and accuracy. In particular for evaluating Research Impact, parameters for quality of publications have been enhanced to include the number of highly cited papers, (i.e., number of papers lying in the top 25 percentile of citations) in addition to the usual parameters of publications per faculty and citations per paper.

The performance metrics have been optimized to provide a good discrimination over a large range of possible values. All research related information, including publications, citations, highly cited papers and even patent information about institutes was collected from third-party databases to obtain an objective and unbiased picture. For this year’s Perception inputs, a large database of eminent academic and industry peers and employers was deployed.

The data received from both institutional and third-party sources were subject to extensive scrutiny for consistency and correctness by a team of experts. The Rankings List includes 100 institutions each in the Overall, University, Engineering and General College Categories, and 50 each in Management and Pharmacy, 25 in Medical and 10 each in Architecture and Law. Additional rankings in suitably bunched forms are also being provided. Four institutions, which could not easily fit into any of the above categories, have been chosen for a special mention for excellence on a few parameters like Research etc.