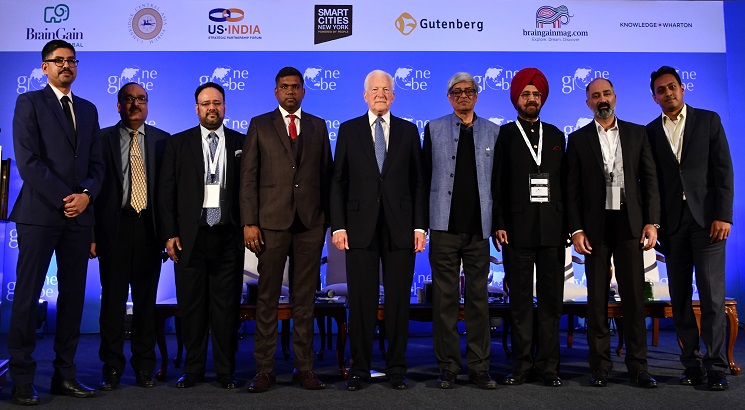 NEW DELHI, FEBRUARY 4: Bibek Debroy, Chairman of the Economic Advisory Council of the Prime Minister, presented One Globe Awards 2019, at the eighth edition of the two-day event (One Globe Forum) in the national capital. The One Globe Awards recognizes and honors organizations and individuals for their contribution in building a 21st century knowledge economy.

The One Globe forum was inaugurated by Satya Pal Singh, Minister of State for Human Resource Development, Speaking at the inauguration of the forum Satya Pal Singh congratulated One Globe Forum which he believes can play a role in uniting humanity and not just building a knowledge economy. He added, the challenge we face is that the Indian ecosystem is devoid of basic human values. A child should go through a holistic development program which is currently lacking in the education system in India.

Dr. Shashi Tharoor, Member of Parliament, Lok Sabha took over the stage as a key note speaker discussing, “The challenge is to allow the society to understand the value of strong foundation. In India, we have a system in our higher education that is over regulated and under governed. As a result, we don’t focus on our outcomes, instead we heavily emphasize on processes that result in lack of flexibility. In many scientific and technical institutions, we tend to teach what is already outdated 7 years ago and this is clearly what is wrong with the 21st century. In working towards the 21st century knowledge economy, do not teach children what to think; teach them how to think, that’s all that matters”.

While congratulating the winners, Harjiv Singh, Founder & CEO, BrainGain Global said, “It is very encouraging to witness a series of efforts being made towards building a 21st century knowledge economy in India. We are very thankful to each one who has won and carved a niche in the century we are in. Right from driving excellence in the digital landscape to creating social impact, everyone has made a significant contribution to build this conversation. In the past seven years, we have witnessed immense transformation and impact on the entire ecosystem”.