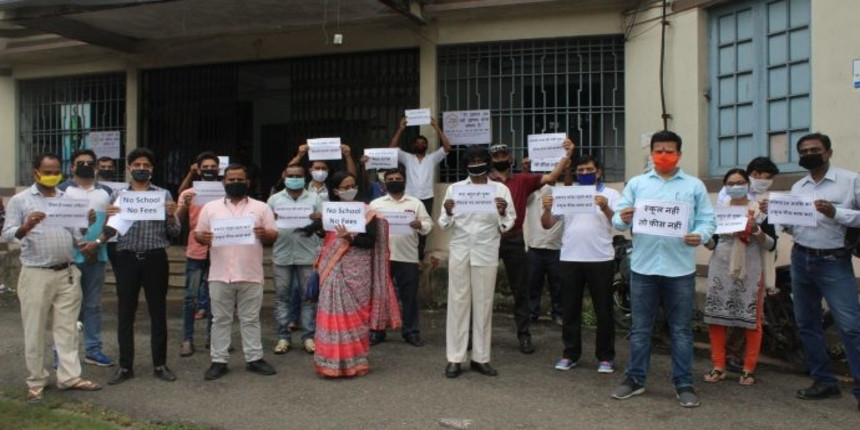 Kolkata: A section of parents on Friday staged protests in front of two prominent schools in south Kolkata demanding slashing of first-quarter session fees due to financial hardship of the guardians in the wake of the COVID-19 outbreak. The protests against high school fees were being held in front of several other private educational institutions since past couple of days.

About 30 parents holding placards like "we demand a reduction in fees" held a silent protest before M B Girls Sishu Bihar on Friday demanding immediate roll back of the first quarter session fees by 50 per cent.

On behalf of the agitating guardians, Rajesh Biyani said, "we demand 50 per cent reduction of school fees for 2020-21. But the school authorities are not ready to sit with us."

He alleged that the school management has threatened to disallow students from attending online classes if the first quarter fees are not paid immediately.

A section of guardians also staged protests before Mahadevi Birla World Academy in south Kolkata during the day demanding reduction in session fees.

When contacted, the authorities of the group of schools said, "we are committed to continue with all efforts to keep the education process going during this crisis."

A spokesperson of the schools said, the group may come out with a statement in leading dailies to list the proactive steps taken by the educational institutions "to make it convenient for parents".

The Mahadevi Birla Sishu Vihar had earlier said in a notice there would be no hike in fees for 2020-2021.

The school authorities had also announced a reduction in certain components of the fees in the first quarter.

The notice had said, due to "the protracted hardships in the current scenario, we have decided to announce a second round of further reductions for the fee payable for quarter 2 over and above passed on in quarter 1."

"While there will be a reduction of Rs 1,800 in the second quarter which translates to Rs 600 per month for the quarter (July, August, September) 2020, for Lower Infant to class 12, no bus fees will be charged for the second quarter (July, August, September) from existing bus students who have paid the bus fees for the first quarter," the notice had said.

Guardians also held protests at St Stephen''s School at Budge Budge in southern outskirts of the city and Scottish Church Collegiate School in north Kolkata demanding that session fees should only include tuition fees till there was an improvement in the COVID-19 situation.

For the past two days, similar protests were held outside Nava Nalanda group of schools, G D Birla Centre for Education, and St Thomas School in Khidderpore.

The school authorities maintained they had not increased tuition fees and had given concessions on certain components of session fees. But altogether waiving other non-tuition components was not feasible and may lead to the closure of schools, they said.

The Nava Nalanda group of schools said it had already effected a substantial reduction in the quarterly session fees and said, "no further slashing is possible".

West Bengal Chief Minister Mamata Banerjee and Education minister Partha Chatterjee recently asked private schools not to hike tuition fees and consider the issue of payment of fees under other heads in a sympathetic and humane manner.