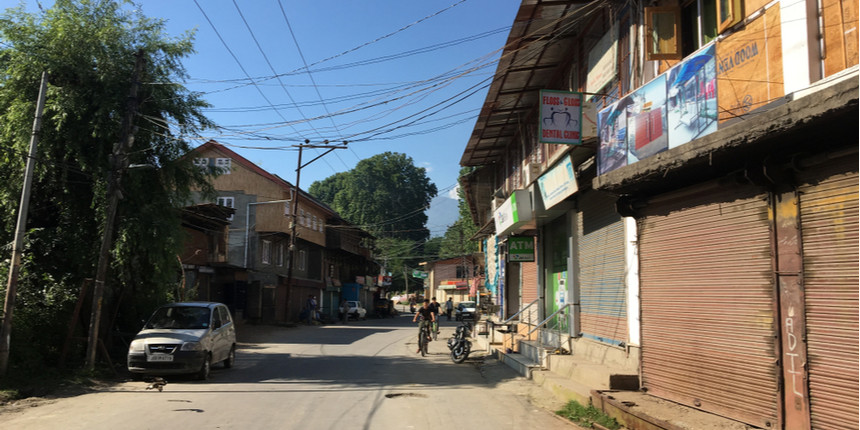 NEW DELHI: Months after the lock-down in Kashmir following the abrogation of Article 370, students studying in private colleges outside the state are having to pay hefty fines due to late fee payment and shortage of attendance.

Most of the students affected were stuck at home during the clampdown. On August 5, the special status of Jammu and Kashmir was withdrawn and the state split into two Union Territories. Although the central government has repeatedly denied it, all communication services, including landline phones, had been blocked and families were confined to their homes. This not only made it difficult for students to reach their colleges, it also meant sources of income dried up for their families. Paying the fees became hard and the fines have made things worse.

“The college authorities are asking students to pay the fine or miss exams,” said Nasir Khuehami of the Jammu and Kashmir Students’ Association. “The students are asked to either pay the fine, or appear for the exams next year or go home.”

One student of BFIT Group of Institutions, Dehradun, reached the college a month later and even though he paid the full fees, he is now being asked to pay a fine of Rs. 5,000 for shortage of attendance.

“I was home for the summer holidays when the lockdown happened,” the student told Careers360 asking not to be named. “I was stuck there and could only join the college one month later. I had to hop onto the back of a truck to get to Dehradun. Even in this condition, I had paid the full fees of the semester in September.”

He is being fined for both falling short of attendance and not paying the fees by the first week of July. “When I requested for relaxation, they said they can’t change the college rules,” he added. “If I join a month later, then obviously I would have a shortage of attendance. But this was not my fault.”

But the BFIT administration denied that students were fined for shortage of attendance.

Aninder Singh Arora, director, BFIT Group of Institutions, said: “First of all, why didn’t the affected student pay the fees in July? The shutdown happened in August. This is a matter of making up excuses. The students who joined late because of the Kashmir issue were not asked to pay fine for shortage of attendance.”

“Also, fine is different from late fees. The students who haven’t paid on time have to pay the late fees. If any student feels that he couldn’t pay the fees on time due to whatever happened in Kashmir he can approach me and I’ll instruct the administration to waive the fee. We are here to help students,” Arora added.

However, the students said their financial situation is such that they were unable to pay the money at that time and when they approached the director he said paying the fee with the fine was their only option.

Meanwhile, six students in a different college in Uttarakhand were asked to cough up huge fines to be allowed to write the exams as they were unable to pay the fee on time.

The students allege that the institutions are not empathetic to their problems as the financial condition in Kashmir even before the lockdown meant that money was scarce.

“I couldn’t pay the fees on time and now they have levied a fine of Rs. 8,000 for late payment of fees. My father is a truck driver. He hasn’t been able to earn much due to lockdown. Even if I ask him for money he won’t be able to pay it and will further be depressed.” said an engineering student in a college in Uttrakhand, who asked not to be named.

“We just want the institution to grant us extensions so that we can pay the full amount at a later date. Even that concession is not provided,” said one student.

Similarly, students of a technical university in Punjab were asked to pay fines amounting to Rs.3,000 which the institutes halved after repeated requests from students. “We requested the administration to waive the fine considering our situation. The administration agreed for a 50 percent reduction in fee and asked us to pay Rs. 1,500 each.”

Correction: The copy has been corrected to say that Jammu and Kashmir were split into two Union Territories. An earlier version has erroneously said it was split into three.