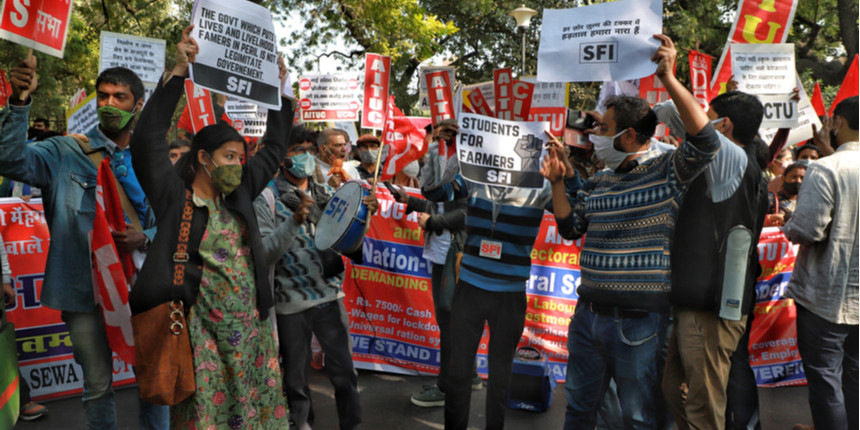 NEW DELHI: Various students'' and teachers'' groups on Monday announced their support to the ''Bharat Bandh'' call given by farmers protesting against the Centre''s new agriculture-marketing laws.

"For the past 10 days, millions of peasants are sleeping on different borders of Delhi in chilling cold and have taken up the battle against the policies that would put them in the bondage of contractors and big corporates. They are demanding the rollback of agricultural laws, scrapping of Electricity Amendment Bill 2020 and legislating the demand of MSP.

"Hence, it is necessary that we, the student community stand shoulder to shoulder with the farmers of our country," they said in a joint statement.

The signatories to the statement included members of the Students Federation of India (SFI), the Congress-affiliated National Students Union of India (NSUI), JNU Students Union President Aishe Ghosh, students of Gujarat and Hyderabad Central University, among others.

The JNU Teachers Association (JNUTA) has also expressed solidarity with the agitating farmers.

"While standing in solidarity with the farmers tomorrow, the 8th of December also happens to be the day of elections of teacher representatives to the Executive Council in JNU. This election is an important milestone in JNU''s struggle to preserve the democratic traditions of teaching and learning in JNU.

"Keeping in mind the importance of the day, we expect JNU faculty to show up in big numbers. In saluting the farmers who have waged a heroic struggle on the borders of Delhi, JNUTA calls upon all its members to support the strike in every possible way," the JNUTA said in a statement.

Thousands of farmers, mostly from Punjab, Haryana and Uttar Pradesh, are protesting at various border points of Delhi against the new farm laws. Several rounds of talks between the Centre and farmers have failed to break the deadlock.

The government has been defending the laws, saying they will help farmers by bringing in new technology and allow them to sell their produce at better prices.

The agitating farmers had on Friday announced a ''Bharat Bandh'' on December 8 and threatened to intensify their agitation and block more roads leading to the national capital if the government did not accept their demands.

"The government is cleverly hiding the fact this provision would only benefit the corporates and rich farmers, since even before such a provision the small-marginal farmers owing to the lack of storage and transportation facilities had to make distress sale of their produce. The distress sale by small-marginal farmers would intensify with the current provision," student outfit Krantikari Yuva Sangathan (KYS) said in a statement.

"Our activists would be participating in the Bharat Bandh call across the states of Delhi, Haryana and Uttar Pradesh," it added.

The Federation of Central University Teachers Association (FEDCUTA) said in a statement, "As a socially responsible teachers community, we cannot be silent bystanders. Teachers understand the pain of being branded and maligned as anti-nationals, when what one is doing is one''s sacred duty to the cause of democracy and for the advancement of our country''s future,"