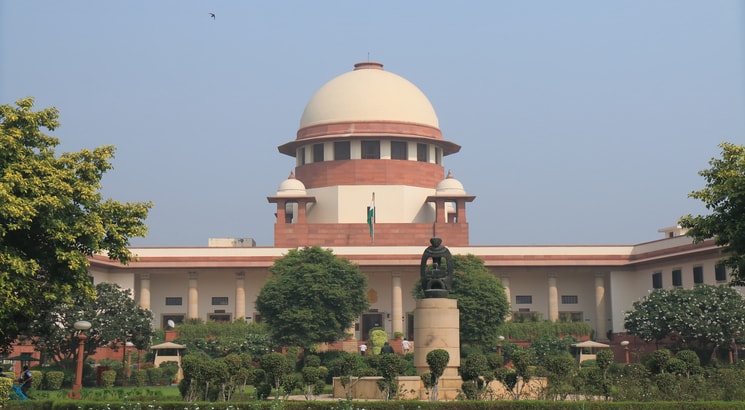 NEW DELHI, AUGUST 28: The Supreme Court of India has opened the doors for low vision students to pursue the MBBS course, upholding the rights of a petitioner who qualified NEET to be admitted under the provisions of the Rights of Persons with Disabilities Act, 2016. Passed on August 24, the historic SC verdict is now expected to allow numerous MBBS aspirants suffering from various forms of visual impairment to avail the 5% admission reservation mandated for persons with disability through the Act and fulfil their dreams of becoming a doctor.

The case, originally filed by Purswani Ashutosh, a medical aspirant from Ahmedabad, via Writ Petition (Civil) No. 669/2018 was heard by a Supreme Court bench comprising Justices Arun Mishra and Indira Banerjee. The candidate had qualified the National Eligibility cum Entrance Test (NEET) 2018 by securing AIR 4,68,982 and his category rank was 2,05,186. Through the Persons with Disabilities (PwD) category reservation, his rank was 419, making him eligible for admissions through the NEET counselling process. However, the Medical Council of India (MCI) had refused to provide the candidate reservation under the physically disabled category, leading him to approach the Supreme Court “under Article 32 of the Constitution of India complaining of discrimination and arbitrariness”.

The court was challenged on two grounds, one being whether the student is eligible to pursue the medical course and if he is, then whether he can claim reservation as per the regulations given in the Rights of Persons with Disabilities Act, 2016.

Rejecting the contentions of the MCI that the candidate suffered from visual impairment above 40%, which as per the MCI regulations disqualifies aspirants with low vision from being considered for admissions in the category of persons with benchmark disability, the Supreme Court ruled that Section 32 of the Disabilities Act was binding for MBBS admissions as well.

What the regulations say

The Graduate Medical Education Regulations (Amendment), 2017 in its Appendix G taken from the Rights of Persons with Disabilities Act, 2016 elaborates on ‘low-vision’ as a condition where a person has any of the following conditions, namely:

As the regulation did not clearly specify the percentage of disability, the MCI set up an expert committee which proposed that aspirants with visual impairment of 40% (Category III) or more cannot pursue MBBS.

The Supreme Court in its July 12 order called for experts opinions from three senior members of the Ophthalmic Department of AIIMS to decide the extent of the disability with percentage and determine whether the same lay within the benchmark of the Disabilities Act. More importantly, the committee was required to ascertain whether the candidate was fit to pursue the MBBS course with the stated disabilities.

On July 16, the committee submitted its memo in which it opined that the candidate’s visual disability lay within the benchmark of the Disabilities Act. However, the committee also reported that as per the guidelines laid down by the MCI, the petitioner was not suitably fit to pursue MBBS. The petitioner subsequently filed a counter-affidavit challenging the report.

In its final verdict, the court agreed with the petitioner’s challenge and emphasized that the Medical Education Regulations framed under Section 33 of the Medical Council Act, 1956 have statutory force and are binding on the MCI. As per Section 33, under which the ‘Regulations on Graduate Medical Education, 1997’ were framed (and later amended in 2017), “5% seats of the annual sanctioned intake capacity shall be filled up by candidates with benchmark disabilities in accordance with the provisions of the Rights of Persons with Disabilities Act, 2016 based on the merit list of ‘National Eligibility-cum-Entrance Test’” and for this purpose “...the specified Disability contained in the Schedule to the Rights of Persons with Disabilities Act, 2016 is annexed in Appendix ‘G’”. Therefore, as per the Court, after the committee has opined that the petitioner suffers from a benchmark disability, its views on the candidate’s suitability cannot override the Medical Education Regulations which clearly provide for reservations to such candidates through the Disabilities Act 2016. 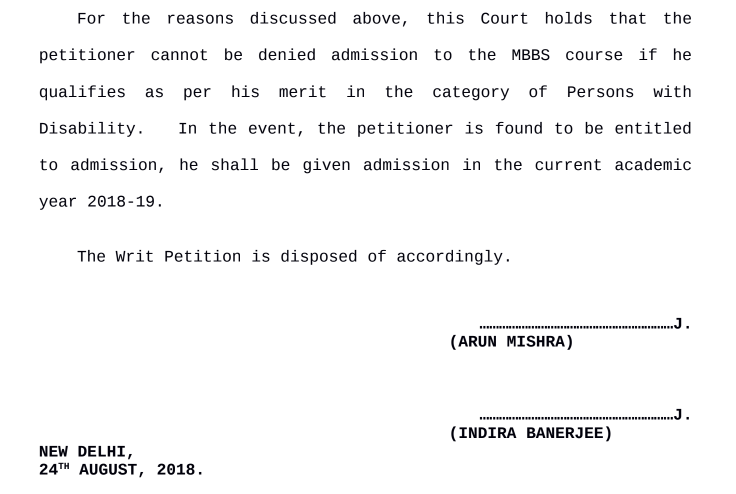 By taking into consideration all the arguments, the court passed the judgement that the petitioner cannot be denied admission. The verdict therefore makes all candidates with visual impairments who are aspiring to join the MBBS course eligible to seek reservation under Rights of Persons with Disabilities Act, 2016.