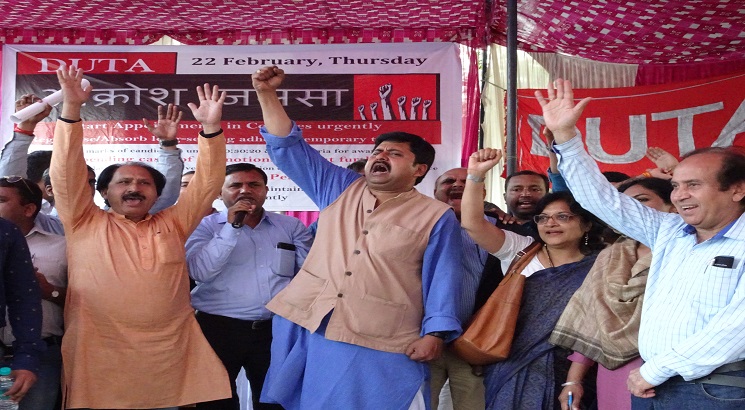 NEW DELHI, MARCH 16: The teaching community have termed the recent University Grants Commission (UGC) Circular on implementation of department wise reservation rosters as ‘Unconstitutional’ and have demanded its withdrawal. They have also demanded that the Government of India should file a review petition before the Supreme Court against the Allahabad High Court Judgement.

The UGC in its Circular dated 5.3.2018 issued to all the Universities has notified fresh reservation rosters for SC/ST Category is to be prepared keeping Department/Subject as a unit instead of the University/College. This was issued following a report submitted by the Committee which recommended for department wise reservation, the Committee was constituted following an Allahabad High Court order which was also upheld by the Supreme Court of India.

The Allahabad High Court during the course of hearing a case on teachers’ recruitment at Banaras Hindu University, Observed that each department, rather than the whole university, should be treated as the ‘unit’ on which reservations are based. The court expressed its displeasure over the Reservation Policy of the UGC. “If the University is taken as a Unit for every level of teaching and applying the roster, it could result in some departments/subjects having all reserved candidates and some having only unreserved candidates. Such a proposition again would be discriminatory and unreasonable,” Court Observed.

The teachers across the Universities views the recent development as a major setback to adequate representation in teaching positions for SC/ST/OBC categories as per the Constitutional requirement of 15%, 7.5% and 27% respectively.

Till now, the UGC had specifically prohibited the practice of making department-wise cadres, as that would lead to the denial of reservation in small departments. “Thus, the UGC notification of 5.3.2018 heralds a complete U-turn in the position of the GoI/MHRD/UGC regarding the Policy of Reservation, that will, by its own long-held and clearly articulated position, pave the way for the defeat of the Constitutional mandate,” The Delhi University Teachers Association said.

The DUTA has demanded that the UGC Circular be withdrawn immediately and consultation with stake-holders held. DUTA demaded, “The GoI/MHRD should file a review petition before a Constitutional Bench of the Apex Court. The entire issue arising from the Allahabad High Court judgment should be referred to the Parliamentary Standing Committee for its consideration and its recommendations placed before Parliament so that the matter is resolved in a manner commensurate with the Constitutional commitment to Social Justice and to ensure proper representation to marginalised sections in teaching positions. Strict implementation of the Constitutional mandate for institutions of higher learning is of far-reaching importance. It is, after all, not only a matter of getting a fair share of employment in Universities and Colleges, but also the right to play a role in the intellectual leadership and moral guidance of future generations.”

Teachers’ Associations of Universities and Colleges across the country are exercised about the matter. A delegation of the AIFUCTO and FEDCUTA also raised the issue in its meeting with the UGC Chairperson recently.