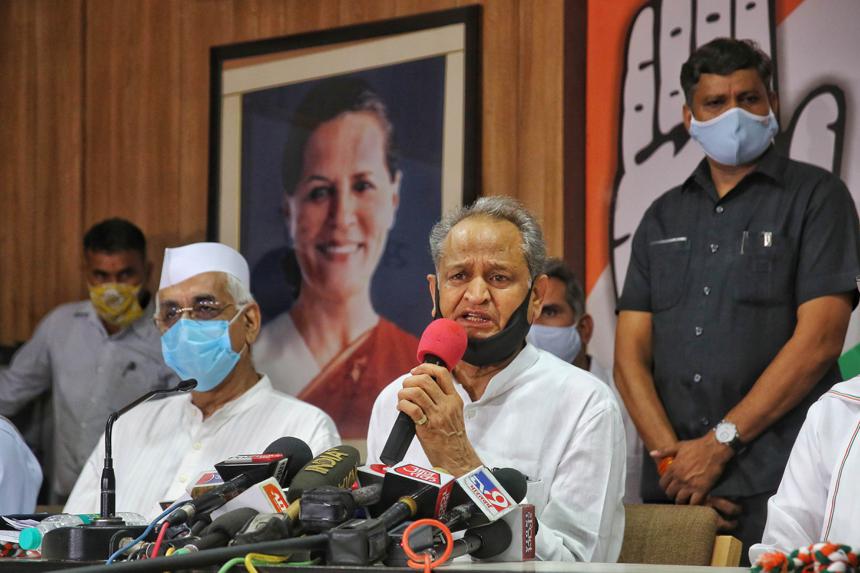 JAIPUR: Rajasthan Chief Minister Ashok Gehlot on Friday described as "unfortunate" the violent demonstration over a teachers' recruitment exam in Dungarpur district and urged protesters to cooperate in maintaining law and order.

Meanwhile, traffic on the National Highway-8 in Dungarpur remained disrupted for the second day. The protesters vandalised a petrol pump in the area. Thirty protestors have been arrested, police said. On Thursday evening, protesters had laid siege to the highway in Rajasthan, pelted police with stones and torched vehicles over their demand to fill vacancies in the unreserved category with Scheduled Tribes candidates.

"Violence and violent demonstration in Dungarpur is very unfortunate. Constitutional right to protest should be used. There should be peaceful demonstrations but no one has the right to take law into their hands," Gehlot tweeted. "My appeal to the protesters is to please cooperate in maintaining peace and law and order," the chief minister wrote. Congress’ chief spokesperson Randeep Surjewala and state party president Govind Singh Dotasara too urged the protesters not take law into their own hands.

People have been “misled”

"It is a request with folded hands to the youths that do not get agitated. Do not take the law into your hands,” Surjewala said here. "The Congress government led by Ashok Gehlot can sit together and solve every issue,” he told reporters.

State Congress chief Dotasara condemned the arson and vandalism in Dungarpur, saying a few people have been “misled”. Dotasara tweeted, "The incident of mob arson and vandalism on Thursday on NH-8 under the guise of nuisance elements is condemnable. I urge you to come forward for talks. We are ready to listen to every lawful demand." According to official sources, a delegation of protesters is likely to meet the chief minister in Jaipur on Friday evening. Police sources said agitated protesters vandalised a petrol pump.

So far, 30 protesters have been arrested while vehicles stranded on the highway are being evacuated from other routes due to traffic disruptions. A mob on Thursday had blocked the National Highway-8 in the Bichhiwara area of Dungarpur, around 500 km south of Jaipur. The candidates of the 2018 exam have been protesting for over the fortnight to press for their demand to fill 1,167 general category posts with ST candidates, police said. The protesters pelted police with stones and torched several vehicles. Police resorted to a baton charge and fired tear gas to disperse the mob, according to officials.

Three persons were arrested. Two police officials -- an assistant superintendent of police and a station house officer -- suffered minor injuries. Four police vehicles were torched by the protesters. Additional police force has been deployed to control the situation.