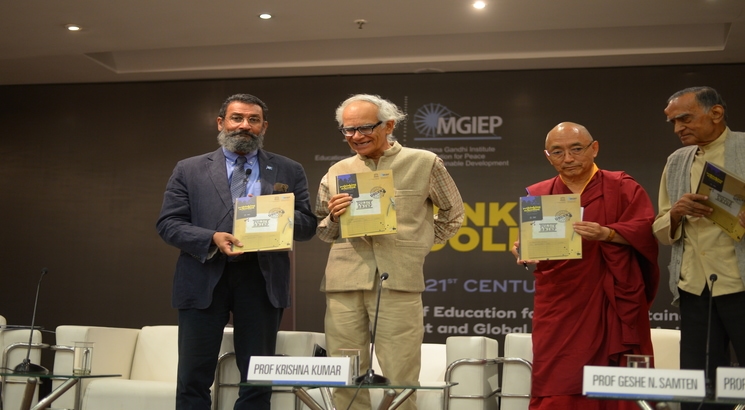 The report analysed curriculum and education policy textbooks from 22 countries of Asia and the Pacific region. The event was attended by over 300 educationists, policy makers and students from the NCR. The launch was followed by a panel discussion with the academicians, Prof. Krishna Kumar, Former Director, National Council of Educational Research and Training; Prof. Geshe Ngawang Samten, Vice Chancellor of Central University of Tibetan Studies, Sarnath, Varanasi; Prof. Muchkund Dubey, President of Council for Social Development, New Delhi.

Prof Krishna Kumar, Former Director, National Council of Educational Research and Training and lead author of the report observed that despite cultural diversity the discourse that emerged in all these countries was very similar. An exhaustive coding scheme was developed for this exercise and it revealed that most countries emphasize on “nation as a privileged identity” as opposed to the commonly held belief of equality and global citizenship.

Dr. Anantha K. Duraiappah, Director, UNESCO MGIEP said, "There are three realities- Emerging problem of depression and suicide, the new need for surviving or negotiating with the 21st century and what we have been doing till now doesn't have an impact in terms of sustainable development. We are all by nature neurologically empathetic, so we will have to find new ways to deal with the situation."

UNESCO MGIEP’s Rethinking Schooling for the 21st Century was officially launched in November 2017 at the 39th session of the UNESCO General Conference. Building on the content analysis of 172 official documents in 18 languages based on a common coding scheme and extensive literature review on Asian schooling, this report seeks to assess how far the aims and values encapsulated in SDG 4.7 have been incorporated into the educational policies and officially-mandated curricula of 22 Asian countries.