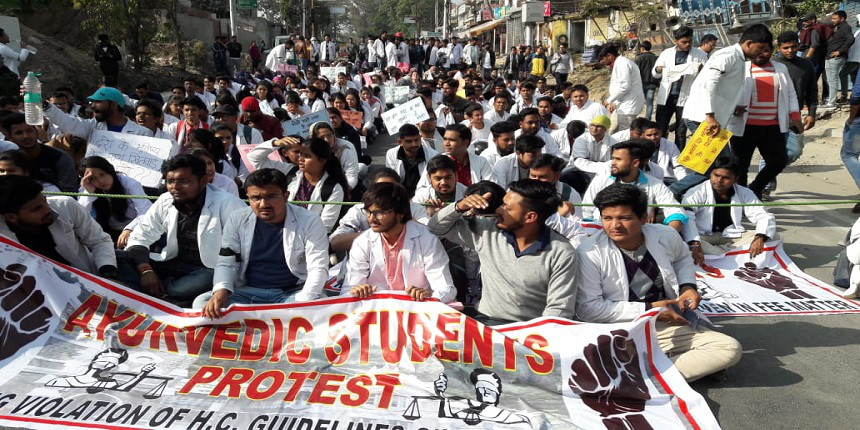 NEW DELHI: The strike by Uttarakhand Ayurvedic Medical College students over non-implementation of a court order against fee hike entered the twenty-eighth day on Monday, October 28, with no signs of any end to the impasse.

On October 9, last year, the High Court of Uttarakhand ordered private ayurvedic medical colleges to refund a hiked fee, but the colleges have not followed the directive till date.

The students of 16 colleges have been on a sit-in protest in the state capital, Dehradun, from the beginning of this month, demanding implementation of the High Court order.

Hinting at disciplinary action against colleges, the Uttarakhand Ayurved University (UAU) Vice-Chancellor Prof. Sunil Kumar Joshi told Careers360 that he has taken up the matter with the governor. “We have to also see that if the affiliation of these 16 colleges are going to be withdrawn in that its case it will not be possible for us to adjust the students to our three colleges as this is also related to the future of our children. Therefore, we have asked the colleges to abide by the High Court directive and do as instructed so that students are not made to suffer,” he said.

“We are serious about this issue, we have intimidated the state administration and the Governor, at the same time we have also asked the colleges to comply with the High Court order,” he added.

The VC had called a meeting within a few days of the students’ sit-in to resolve the fee hike issue. However, only a handful of colleges turned up for the meeting.

Earlier in 2015, the fees of private ayurvedic colleges were hiked from Rs. 80,000 per year to Rs. 2.15 lakh. This led to protests, with the students termed it as an unjustified move to increase fee by three times, without following fee fixation committee norms. Following this, hundreds of students approached the High Court demanding rollback of the increased fee.

Lalit Tiwari, one of the students who approached the High Court alleged that the state government was hand-in-glove with the private colleges as some of them are owned by leaders of the ruling party. “In 2015, an order was passed under which fee of ayurvedic colleges was increased from 80,000 to Rs. 2.15 lakh. It was not just this, the colleges add other expenses like development charges, library fees, etc and this fees initially went up to Rs. 1.35 lakh and now it is Rs. 3 lakhs. We approach the court last year and the HC had ordered college authorities to refund the hiked fee but not a single college followed the directive,” he said.

Earlier this year, the colleges concerned were issued a contempt notice by the High Court for not revoking the increase in fee and also to allow students to sit for the exams.

Colleges maintain that as the matter is under contempt proceedings of the court they cannot take any action on fee refund unless the proceedings are finalised.

“As soon as the High Court order came we changed our fee structure and went back to the previous fee structure. Now the matter the sub judice and refund of fee will be decided by the court and the college management will take action accordingly,” Dr. Anil Kumar Jha, Principal of Himalayiya Ayurvedic Medical College, said.