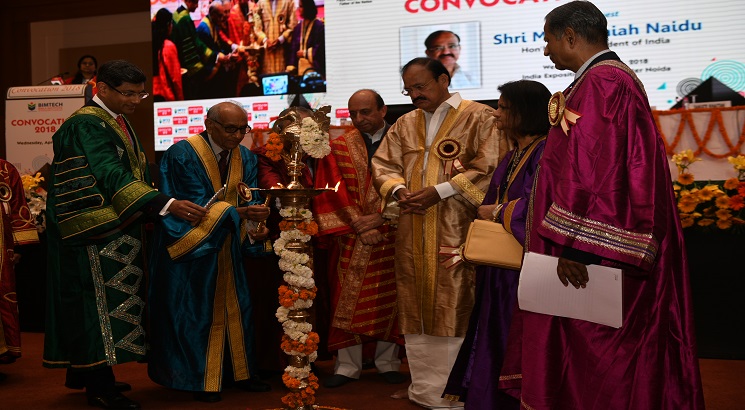 Vice President of India, Venkaiah Naidu was the chief guest for the occasion said, “Twenty first century India has got some extraordinary talent which the youth must upgrade from time to time so that they grab opportunities that will help them to excel in the corporate world. He laid emphasis on the fact that students should build the four positive C’s- Character, Calibre, Capacity and Conduct.”

He further coined words such as “Reform, Perform, and Transform” to encourage the students to become worthy citizens of the country.

The students of batch 2016-18 felt really delighted and privileged on being given their diplomas by the Vice President himself. And the message that the honourable vice president gave to the passing batch was that education should not be for commission instead it should instil values.

Also he said that talented youth should assume the role of being job creators instead of being job seekers. This process might give temporary pain but will deliver long term gains. He quoted former president of India Dr. APJ Abdul Kalam and said “ That one should aim high and work hard for it”. Lastly he appreciated BIMTECH for its various endeavours and said that knowledge has no frontiers and one must care for the ones close to us and specially work for the betterment of the society.

Dr. H. Chaturvedi, Director, BIMTECH presented the annual report and gave his blessings to the students.

It was a day of mixed emotions for all the students who were passing out .On one hand they were elated on getting their diplomas and posed happily with their batch mates in their full black convocation attire which had them wearing their academic caps and black robes, whereas on the other hand they were emotional about going away from a place in which they had strings of memories attached and which had taught them a lot.